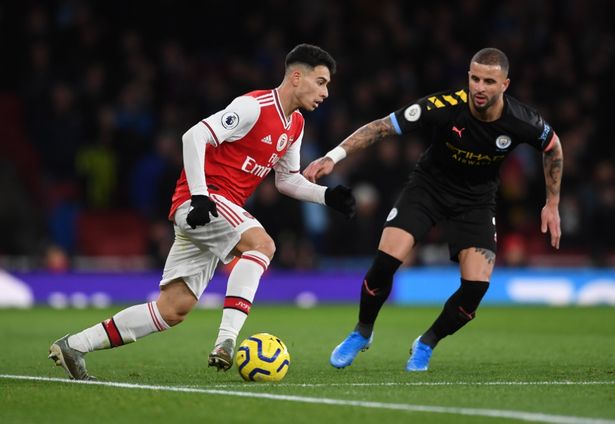 The magnitude of the task at hand is highlighted by a look at what happened when the two clubs met just a few weeks before Arteta became the new Gunners manager in December.

A Kevin De Bruyne double – including an opener after just two minutes – and an early Raheem Sterling strike ensured City were 3-0 up and cruising by half-time and never needed to get out of second gear.

But there is set to be plenty of change when the sides meet tonight – with at least six members of the starting line-up expected to be different under Arteta.

That includes a much-changed back four which could see four new faces from that side, as well as crucial changes in midfield and attack.

Ljungberg opted to utilise Ainsley Maitland-Niles at right-back with Sead Kolasinac shifted to the left flank whilst Sokratis and Calum Chambers played in central defence.

The quartet were exposed but could all be out of contention this evening, with Hector Bellerin and Kieran Tierney expected to line-up at full-back with David Luiz and Shkodran Mustafi the most likely central defensive partnership.

Whilst there are question marks over some of those spots, Pablo Mari or Bukayo Saka are in line to feature instead of Mustafi or Tierney, rather than the options used by Ljungberg.

Grant Xhaka was also absent against City and is now very much back in favour, most likely to replace Lucas Torreira alongside Matteo Guendouzi in the middle of the park, although a further change could see Dani Ceballos also start.

Nicolas Pepe and Gabriel Martinelli were deployed out wide against City in December with Pierre-Emerick Aubameyang leading the line.

But Aubameyang has often featured on the left under Arteta, and with the Spaniard indicating a role for Eddie Nketiah, he will likely replace Martinelli in the starting line-up before things are shifted around.

There will be high hopes a much-changed side with a different setup will achieve much more success against City this time around.

The most beautiful players of the last decade – Murray, Sharapova, Lopez and…