A match on the Adria Tour, an exhibition circuit organized by Novak Djokovic in the Balkans, was canceled on Sunday after a player tested positive for the coronavirus.

They have not only played tennis in front of big crowds on the Adria Tour. They have hugged, high-fived, and partied together: Some of the players even formed a line and did the limbo on a night out in Belgrade, Serbia. 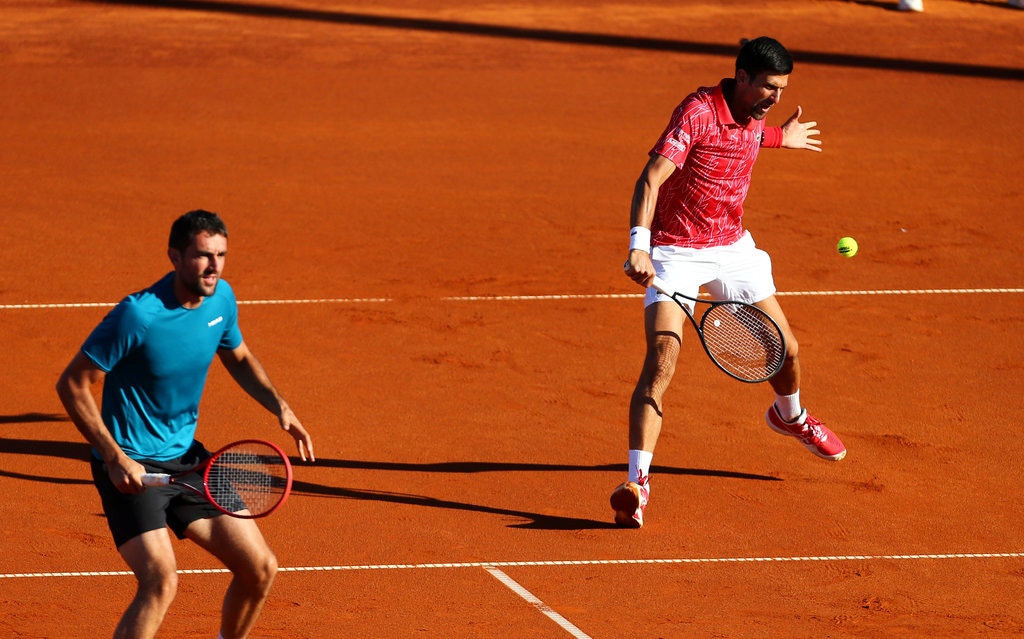 But the consequences have quickly become much more serious than the mood with two of the tour’s main attractions, Grigor Dimitrov and Borna Coric, announcing they tested positive for the coronavirus and another, Viktor Troicki, doing so, according to a Serbian media report.

Nick Kyrgios, tweeting from his home nation, Australia, called it “a boneheaded decision” to play the event, an exhibition series organized in the Balkans this month by Novak Djokovic, the top men’s singles player.

“Speedy recovery fellas,” he wrote in response to the positive tests. “But that’s what happens when you disregard all protocols. This IS NOT A JOKE.”

Dimitrov, the Bulgarian star and a 2019 United States Open semifinalist, announced his test result on Sunday after returning to his base in Monaco from the tour’s latest stop in Zadar, Croatia.

“I am so sorry for any harm I might have caused,” Dimitrov said on social media.

Coric, a promising Croat ranked 33rd in men’s singles, said on Monday that he also had tested positive. So have Troicki, a prominent Serbian player; Christian Groh, Dimitrov’s coach; and Marco Panichi, Djokovic’s fitness coach, according to media reports in Serbia.

Three other players on the Adria Tour — Alexander Zverev, Marin Cilic and Andrey Rublev — announced Monday that they had tested negative for the virus but would be self-isolating for 14 days.

“I deeply apologize to anyone that I have potentially put at risk by playing this tour,” Zverev, the seventh-ranked men’s singles player, said on Twitter.

Dimitrov’s announcement forced event officials to call off Sunday’s final between Djokovic and Rublev. Djokovic, who was in frequent physical contact with Dimitrov during the tour, has returned to Belgrade and is expected to announce on Tuesday the result of the coronavirus test he said he had taken.

The remainder of the Adria Tour, scheduled to head to Montenegro this week, is now very much in doubt. But the response over the lack of social distancing — which included pickup basketball and a group photo with ball kids — from some in the tennis community has been swift and severe.

“I sum it up as a horror show,” Bruno Soares, a member of the ATP Player Council, of which Djokovic is president, said in an interview with the Brazilian news outlet GloboEsporte. “Enormous irresponsibility and huge immaturity. They were totally careless, and it’s difficult for me to find the words.”

No paragon of self-restraint, Kyrgios has been suspended from the tour for misbehavior and fined frequently. But in this health crisis, he has urged tennis to take a conservative approach, as he also criticized the recent decision to hold the 2020 United States Open on its originally scheduled dates.

But the U.S. Open and the regular tour events that will precede it are to be played without spectators and with strict social distancing requirements. There have been no such limits on the Adria Tour, in part, as Djokovic has explained, because local authorities did not require them. Serbia and neighboring countries have had comparatively few positive coronavirus cases and reported deaths.

Even before Dimitrov and Coric tested positive, there was concern about the optics of full stadiums and partying players with so many still suffering worldwide.

“You’ve got to be aware of who you are and leading by example,” said Patrick McEnroe, an ESPN analyst and former player who has recovered from the coronavirus, referring to Djokovic. He added that it would be “hard to imagine” another top player, like Rafael Nadal, Roger Federer or Serena Williams, holding a similar tour.

When the men’s and women’s tours shut down in March because of the pandemic, Djokovic was undefeated on court in 2020, but he has hardly been on a winning streak during the extended break. He has incited controversy by questioning the necessity of an eventual coronavirus vaccine and explaining that he would have a hard decision to make if getting one were required by the tour. When the U.S. Open announced its plans to protect players from the virus by limiting the size of entourages and restricting players’ movement, Djokovic was an outspoken critic of the idea, calling the plan “extreme” and questioning whether he would play.

But the risks of taking a less cautious approach are now clear, particularly in a sport with an international group of players who have to travel.

“Hopefully people will be able to discern that this isn’t an issue with the concept of returning to tennis but of how you return to tennis,” said Mark Ein, the owner of the Citi Open in Washington, which is scheduled to be the comeback event for the ATP Tour in August. “Even if places feel safe, it’s still prudent to take the basic precautions.”

Andrea Gaudenzi, the ATP chairman, said the tour had recommended that players competing on the Adria Tour and in other unsanctioned events take “proper precautions and respect social distancing.” But ultimately the ATP had no jurisdiction to impose safety regulations.

“Obviously we feel sorry for the players,” Gaudenzi said in a telephone interview. “We want them to recover as soon as possible. I know there has been a lot of criticism, but on the other hand, we at the ATP, the U.S.T.A., and everybody, we have to be careful because we also have to be conscious that even with extreme measures, you could actually end up having some players testing positive. You don’t need players and people hugging each other for someone to test positive. So we’re all running the risk.”

The positive tests on the Adria Tour could help make subsequent events safer, Gaudenzi said, by making players more willing to stay in the restricted environment imposed to reduce the risk of infection.

“It’s a little bit like when you tell your kids when they try to learn to ride the bike to wear the helmet,” Gaudenzi said. “It’s ‘no, no, no’. And they ride the bike, they fall, and then they wear the helmet. Now we all know we can get this very easily, so we’re going to be even more careful, and maybe we will have a little bit more tolerance toward the bubble.”

Rafa Nadal and I have had our differences, but he’s an absolute champion,’ says Nick Kyrgios

Nick Kyrgios admits that he and Rafa Nadal have ‘had their differences’ over the years but he can’t help but admire his achievements.

Nadal won his 20th Grand Slam crown at Roland Garros earlier this month to draw level with Roger Federer in the history books.

Kyrgios has a bit of a storied past when it comes to spats with Nadal, who he once branded ‘super salty’ whilst accusing him of being a bad loser.

Even he, though, can’t deny the Spaniard has achieved something special.

“I wasn’t surprised when I saw Rafa Nadal pretty much easing his way through the draw at the French Open,” Kyrgios told Courtside Huddle.

“That’s his backyard, he loves playing there and he has only lost two matches in his entire career.

“Honestly, in my opinion I don’t think we are going to see anything like that ever again.

“Somebody so dominant on a surface he’s right there with the greatest of all time. You can argue that he is the greatest.’

“You look at Federer, he’s the most dominant player of all time, but in this era it’s actually Rafa. It’s a debate you can have.”

“We had our differences when we played each other. We’re fiery, we’re competitors and are going to go after each other.

“But at the same time I am not going to take anything away from him . He’s an absolute champion and 20 Grand Slam is ridiculous and I don’t think we are ever going to see that again.”