In June 2020, a message supposedly written by tennis star Serena Williams about how she was sick of COVID-19, black versus white, and Republicans versus Democrats went viral on social media:

NBA player Rudy Gobert also shared this post as if it was penned by the famous tennis player with a record-breaking 23 Grand Slam singles titles, and even tagged her in his post.

The above-displayed message was definitely posted by a person named Serena Williams, but not the famous tennis player. The Facebook user who posted the message wrote on her bio: “Nope, not THAT Serena Williams 💍 Justin’s wifey & Bentley’s mommy 🐕”

Although not-tennis-Serena posted this message to her Facebook page on June 14, she is not the original author of this post. It appears that this message first started circulating on June 2 when it was shared (and presumably written) by Facebook user Gina Torres: 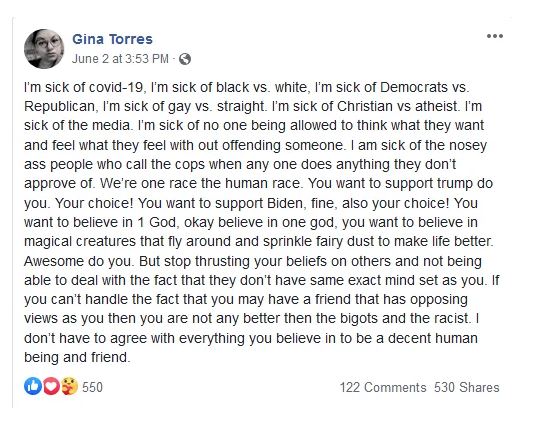 In short, the viral message was written by a Facebook user named “Gina” at the start of June 2020. The message went viral a few weeks later when a woman named “Serena Williams” shared this message and internet users mistook it for a post from the famous tennis star.