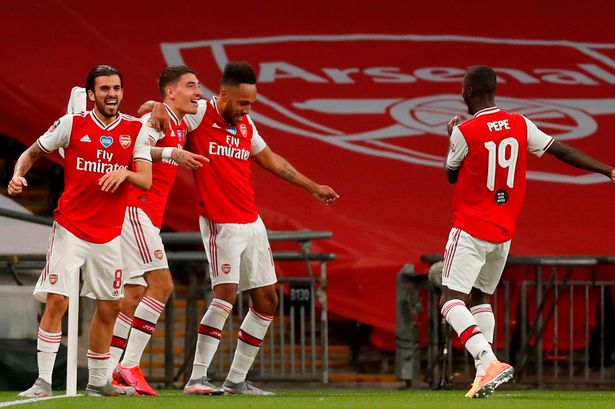 A drearily familiar start to a game between Manchester City and Arsenal. The Gunners look nervy at the back, unable to pick their pass forward and as pinned into their own half.

And now nine minutes in Shkodran Mustafi is dawdling on the ball, using up 1% of the meagre 19% possession Arsenal have registered so far to give it back to his opponent.

Raheem Sterling is coming to nick it off him, City will score. Then they will score another. Then another, then they’ll get bored and we can all file our match reports.

It’s City today, it could just as easily be Liverpool or Chelsea or Bayern Munich, if only the Gunners could achieve enough to get back to a level where Germany’s finest were handing out ritual thumpings to them.

The ball isn’t even in the net but the end feels in sight. But out of nowhere here comes Granit Xhaka to save the day. As City try to roll the ball past Emiliano Martinez the man who has become the heart and soul of the Arteta revival steams past his opponents to thump the ball out for a corner.

And with that industrial act Arsenal seem to drag themselves out of the quicksand. As a one off it might feel unremarkable but when twice in a week you have seen this team turn around what appears to be a losing situation one has to conclude that this is not just a coincidence, that everything Arteta has been promising is coming to pass.

There is a culture at this team now where Arsenal will simply not allow their opponent to beat them because they worked harder or wanted it more. If City were to reach the FA Cup Final they would have to make their quality show.

Arteta had hinted as much on Wednesday, when a weakened Arsenal had battled their way to a 2-1 win over the champions, throwing themselves at every loose ball, chasing every cause long after it was lost.

The Gunners boss said after the game: “The gap between [Liverpool and Arsenal] today is enormous, we can not improve it in two months, but the accountability, the fight, the energy, the commitment is now equal and I am very proud of that.”

In the short term it is all Arteta can do.

The truth is still that Arsenal’s playing squad is inferior to Manchester City’s and Liverpool’s. If you made a combined XI you might feel entitled to name either of the top two in their entirety without a Gunners player were it not for fear of what their official Twitter account might do to you.

And yet in the space of three days they can hold on against City and Liverpool, defending with a healthy dose of luck but with outstanding communication, commitment and energy. Xhaka seemed to be on the end of every cross, Tierney tackled with relish whilst David Luiz’s entire game was a repudiation of the horror show he inflicted on his team-mates at the Etihad.

As Luiz himself noted: “We [won] because we were humble, we understood how we had to play. We have to be mature and understand which level we are in the process.

“We have an amazing coach who wants to bring the best football to the club but not 0 to 100.”

They certainly seem to be moving towards 100 rather swiftly. Even in the space of Project Restart, which began with a familiar 3-0 defeat to City, Arsenal seem to have made radical improvements.

What has changed? Arteta identified it on July 4 after the first of a trio of hard-fought, incisive victories, this one against Wolverhampton Wanderers. “I think the reason we can win against any team is because at the moment we are enjoying suffering together.

“In difficult moments, if you can enjoy doing that then you will get rewarded because we have the ability afterwards to hurt teams.”

It is important at this juncture, when Arteta has truly reunited a club that seemed to be bursting apart at the seam, to note just how recently Arsenal were inflicting suffering on each other. After all this has been the season of Granit Xhaka swearing at his own supporters, of another club captain going on strike to force a move, of Aubameyang berating Joe Wilock in front of the Emirates Stadium.

Arteta and his players will rightly win plaudits for the flowing 18 pass counter that led to Aubameyang’s opener, one where they showed the purpose and technical quality to build from near their own goal line to City’s net, and the elegant through ball Tierney supplied for the decisive second. 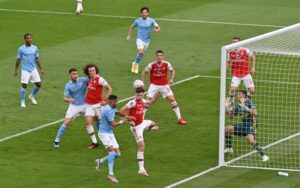 Those flashes of quality are the city upon a hill that Arteta’s team might just be destined for. The journey there might be no less enjoyable, particularly when victories are won in that most un-Arsenal of ways, dealing with balls into the box, holding their line, talking to each other and suffering together.

Arteta has changed the mindset of these players, convincing them they can win even when they have been knocked to the ground. It is an achievement that many a coach waits years for. Arsenal’s has done so in half a season. What comes next could be thrilling.

‘Roger Federer’s got everything you wish for’, says former World No. 1