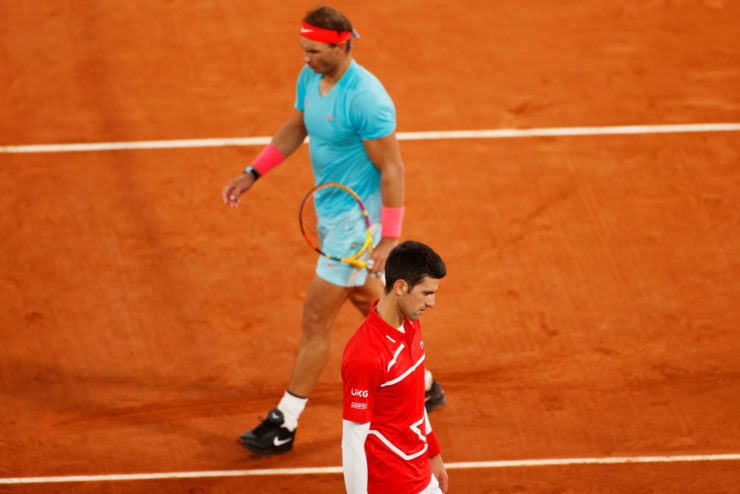 Many tennis fans wonder how Rafael Nadal and Novak Djokovic get along outside the tennis court. Their conduct towards each other on the tennis court is always respectful, and that translates outside the court as well, as admitted by Nadal. The Spaniard spoke about his relationship with Djokovic, whom he called a good person.

“I have a good relationship with him. Is a good person. We must relativize things between us,”  Nadal said, in a recent interview, throwing light on his camaraderie with Djokovic.

There was also speculation among fans as to what Rafael Nadal and Novak Djokovic spoke about at the end of their French Open 2020 final. Interestingly, it was one of the most one-sided battles they have played over the years. However, Nadal said that Djokovic, with whom he shares a strong relationship, simply congratulated him and nothing more.

Rafael Nadal understands why Novak Djokovic did not say much

“I could not talk to him. He congratulated me on the track and that’s it. It is normal,” Nadal said. He said he understands that Djokovic was not in a mood to talk, as no one usually is, after a heartbreaking loss.

“When you lose a game like that, you don’t really want to talk. I understand it,” Nadal added.

Nadal avenged his one-sided loss in the 2019 Australian Open final against Djokovic. The two men also shared a respectful exchange during the trophy ceremony post their match. Nadal lauded Djokovic and said he hopes to keep facing him, further adding to their already great rivalry.

What you’re doing in tennis is very very special. Hope to keep facing you [Djokovic] on the court for the next couple of years,” Nadal said to Djokovic.

The mutual respect between the two stars

Despite not having a conversation with Nadal after the match, Djokovic spoke highly of Nadal in his post-match presser. Djokovic highlighted why Nadal is a great champion. He also admitted that it was one of those days where Nadal was simply the better player and there was not much he could do to tame the ‘King of Clay’.

“I was also thinking that these conditions are more favorable to me. I was feeling great throughout the tournament playing. […] But, yeah, I mean, Rafa has proven everybody wrong. That’s why he’s a great champion. He just played a fantastic match today,” he said.

The two champions are expected to resume their rivalry at the ATP Finals next month. While they will not face each other in the Round Robin stage, the anticipation of another Nadal-Djokovic final is already running high.