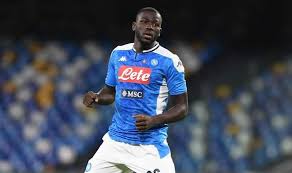 Kalidou Koulibaly has spoken about his future at Napoli amid transfer links with Man City and Manchester United.

Both Manchester clubs in their own way have had issues defensively this term, and Napoli star Koulibaly has been one of the names involved in speculation aplenty.

Whilst United do not have Koulibaly on their transfer wishlist for the summer, it hasn’t stopped the rumour mill going into overdrive.

City, meanwhile, have struggled this season at the back after not replacing former captain Vincent Kompany and losing Aymeric Laporte to injury for a significant portion of the 2019/20 campaign.

The Blues are interested in signing a centre-back this summer and an addition such as Koulibaly would be a massive boost, but the 29-year-old’s most recent comments on his future downplay the chance of him leaving at the end of the season.

He told Gazzetta dello Sport : “In football, you never know what happens. I never spoke to Napoli about leaving. If we have to find a solution, we will find it, but I have never talked about the transfer market.

“I also read in the newspapers about my future. But I only want to think about playing, I am 100 per cent [committed to] Napoli and it bothers me to be linked, every day, to this or that European club.

“We will see what the president (Aurelio De Laurentiis) will decide and if he proposes to extend my contract, that would allow me to end my career here.

“At the moment, I still have a three-year contract and I am not thinking of anything else but Napoli.”