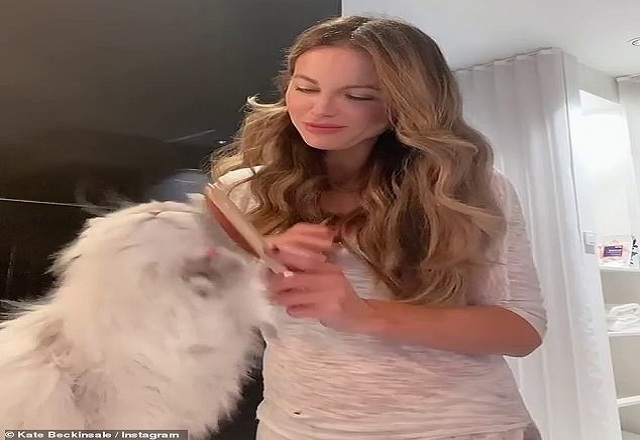 Her feline friends have become social media stars amid the world’s national lockdowns.

And Kate Beckinsale shared an amusing video with her adorable cat Willow as they enjoyed a pampering session together at home on Saturday.

The actress, 47, doted on her pet, who was sitting in the sink watching her get ready for the day, as she combed her fur and brushed her teeth at the same time.

Willow appeared delighted to be spending time with Kate, as she pawed her hair while Kate was brushing it to indicate she wanted the actress to comb her fur.

As Kate brushed her teeth, the fluffy white cat could be seen biting down on her own toothbrush, apparently also helping to clean them.

Kate also put on some cream on her face and after moisturising she gently patted Willow’s face before giving her scratch under her chin.

Clearly pleased with their pampering session, Willow licked her mother’s face affectionately as Kate leaned in for a kiss.

Earlier this week, Kate’s cat Clive stole the spotlight once more as the crop-top clad actress performed an Oasis classic with the feisty feline by her side.

The Underworld star wowed as she showcased her taut abs in the tiny top, while an unimpressed Clive wore a tiny woollen hat, as the beauty lip-synced to Oasis’ Champagne Supernova.

Kate displayed her honed legs in snakeskin print leggings and knee-high boots as she dramatically lip-synced, while a feisty Clive put up with the unusual attire. 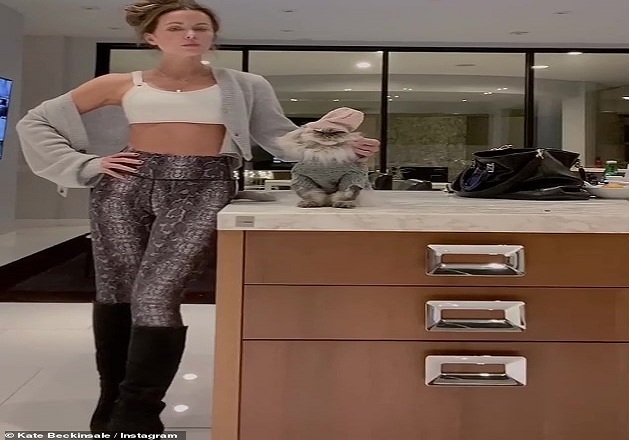 The Pearl Harbor star couldn’t help but notice Clive’s similarity to the famously steely Oasis frontman, writing: ‘Clive got the big Liam energy’, before posting a hilarious comparision shot of Liam in a similar woollen hat.

Last week, Kate made her cat Willow the star of the show , when she shared video of her pet looking unimpressed as she wore new pink winter woollies. 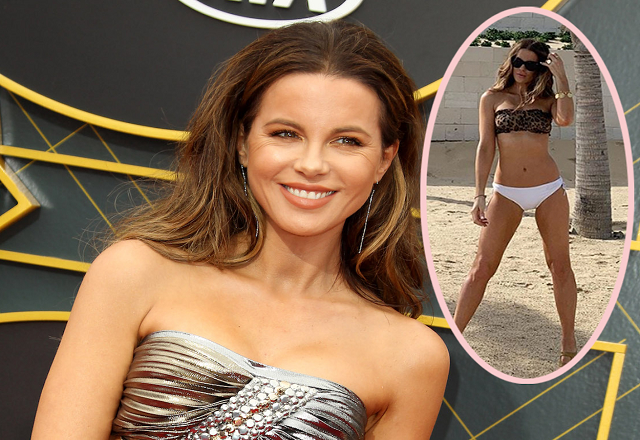 Looking svelte in a white Nike crop top with grey jogging bottoms, the actress was seen dancing around her kitchen to Billy Joel’s ’80s hit Uptown Girl, while Willow relaxed on the floor in her ensemble barely batting an eyelid

Keira Knightley stuns as she receives the incredidible – see photos

Kate Beckinsale Slams Fan for Demanding “Beautiful Pictures” of Her

Jessica Alba Made A Brilliant Fashion Statement In This Dark Green Pant Suit, Have A Look

Kate might really be onto something with her hairdos.- photos