Kate Beckinsale has sparked backlash over videos she posted showing herself playing with Aussie animals inside a house in Canada.

The video was captured over the Easter long weekend, with the actress sharing it to her Instagram account days later.

“Weekend roundup,” she captioned the videos, in which she could be seen cuddling kangaroos, a wallaby and a sugar glider. One kangaroo was also seen wearing a nappy as it hopped across the floor.

“Pretty sure under Australian laws you can’t export them privately so this is pretty messed up,” one follower commented, with another adding, “Seeing our native fauna being treated like a toy and wearing a nappy is also messed up.”

“I absolutely hate it. Obviously not anything to do with Kate but it upsets me so much to see things like wallabies and sugar gliders as pets when it’s illegal here.”

“Poor little beasts! Shouldn’t they be in the wild?” yet another commenter wrote.

Meanwhile, Beckinsale’s friends praised her for handling the animals with care, with celebrity friend Kelly Osbourne left in awe. 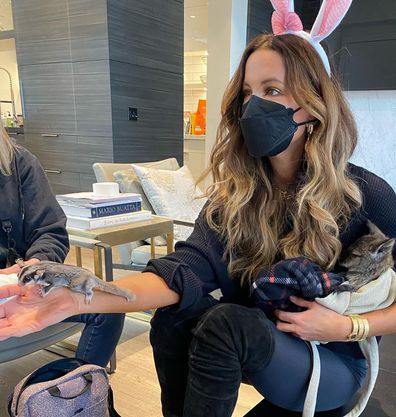 Other fans have come to Beckinsale’s defence, arguing it’s likely the animals are rescues from a local kangaroo farm in Canada.

It’s believed Canadians are allowed to keep sugar gliders and wallabies as pets in the country but rules vary when it comes to kangaroos and certain regions.

Rachel McAdams’ New Hair is Flawless ,there is no look she cannot pull off – check

kate beckinsale “collapsed inside” after her loss. – check