Liverpool have been tipped to beat Manchester City in a transfer battle to sign Leicester City centre-back Caglar Soyuncu. The 23-year-old has established himself as a key player for boss Brendan Rodgers this season and has helped the Foxes reach third place in the Premier League. 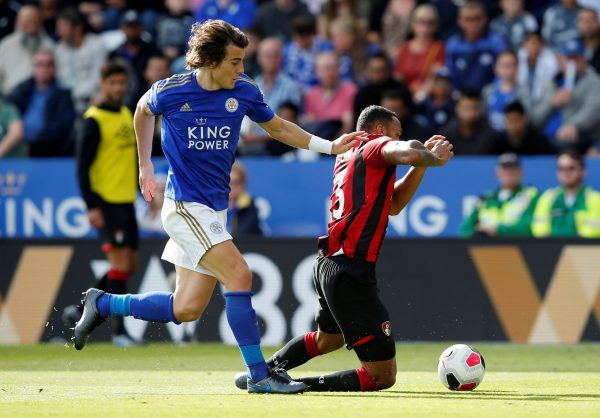 Soyuncu only featured in eight games in his debut season for the Foxes but has successfully filled the void left by Harry Maguire this campaign, when the England international sealed his move to Manchester United.

And his performances have attracted the attention of City boss Pep Guardiola, as well as Barcelona, Real Madrid, Atletico Madrid and Paris Saint-Germain.

However, Soyuncu’s former agent, Mustafa Dogru, believes Liverpool are the only club in the Premier League who could tempt him away from Leicester.

“I think only Liverpool have the power to sign Caglar Soyuncu in the Premier [League] because of his economic conditions,” he told Spanish publication AS.

The report claims Leicester have placed a £45million (€50m) valuation on Soyuncu.

Liverpool boss Jurgen Klopp has been linked with adding another defender to his squad as he searches to find a long-term partner for Virgil van Dijk.

As for City, Guardiola decided against signing a centre-back in the last two transfer windows, with the Spaniard happy to rely on defensive midfielder Fernandinho filling in as required.

But the club appear to be ready to change their approach this summer and have been linked with several defenders ahead of the transfer window opening.

Dogru was responsible for securing Soyuncu’s move from Turkish outfit Altınordu to Freiburg in 2016 and then his £19million move to Leicester two years later.

However, the football agent warned that a move to Barcelona is also a possibility as the club have been following Soyuncu for several years.

“It is possible Caglar can go to play for Barcelona this summer,” Dogru added.

“Barca already wanted to sign him when he played for Altinordu. We have negotiated with them and they have presented a project.

“But we think that he should go to a team where he is a permanent starter, for him to develop properly.

“For this reason, we decided to accept the Freiburg proposal.”

Although, Dogru also feels PSG could also make a move for the Leicester centre-back this summer as well.

“But we must not forget French teams,” he added. “PSG could be a surprise.”