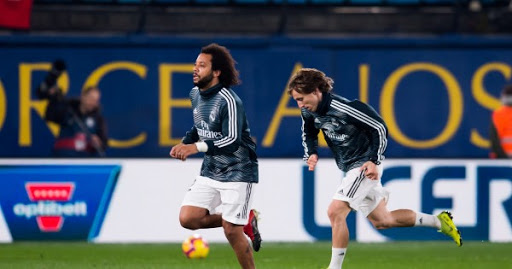 Real Madrid will be gunning to grab all three points and move to the top of the La Liga table when they lock horns with Real Sociedad at the Reale Stadium on Sunday night.

Heading into the game, Real Madrid manager Zinedine Zidane has no fresh injury concerns. Once again, Los Blancos will be without the services of playmaker Isco, along with Lucas Vazquez and Luka Jovic, while defender Nacho also misses out. Mariano Diaz has recovered from his fitness issue and is named in the 23-man squad ahead of the game.

There are unlikely to be a host of changes to the side that beat Valencia 3-0 earlier this week. In goal, Thibaut Courtois will be looking to add another clean sheet on Sunday as he looks to strengthen his chances of winning the Zamora Trophy.

Guarding him at the heart of the Real Madrid defence will once again be Raphael Varane and captain Sergio Ramos. Dani Carvajal is a certainty to feature at right-back, but there could be a change on the left as Marcelo is in contention to replace Ferland Mendy, after being benched for the previous game.

The midfield department has been in brilliant form in the last two games for Real Madrid. Casemiro has been his usual imposing self at the base of the midfield and should continue to feature against Sociedad. Toni Kroos should also start again too, after enjoying a couple of brilliant outings over the last week.

Luka Modric has also impressed since the resumption of the campaign, but three games in the space of a week could be asking too much of the 34-year-old. Hence, there is a chance that Zidane opts to bench the veteran on Sunday, with Federico Valverde occupying the third midfield slot for Real Madrid.

Karim Benzema has been reinvigorated since the campaign restarted and has easily been Madrid’s best player in the last two matches. The Frenchman should continue to spearhead the attack on Sunday night, with a fit and firing Eden Hazard lining up on the left.

Marco Asensio made a spectacular return to action in midweek after having not played for nearly a year. However, Zidane insisted the Spanish international will not be rushed back into the thick of things.

“Marco is here with us. He came on the other day and we’re delighted with what happened but we’ve got to take things one step at a time. We’ve got to take it slowly and after such a serious injury, we’ve got to go step by step, which is what we and he are doing,” the Real Madrid manager said.

So, it is unlikely that Asensio will start on Sunday, leaving Rodrygo Goes and Vinicius Junior to compete for the right-wing slot. The latter, who has made a couple of appearances from the bench so far, might be in line for a starting berth against Sociedad.

Rachel McAdams’ New Hair is Flawless ,there is no look she cannot pull off – check

kate beckinsale “collapsed inside” after her loss. – check