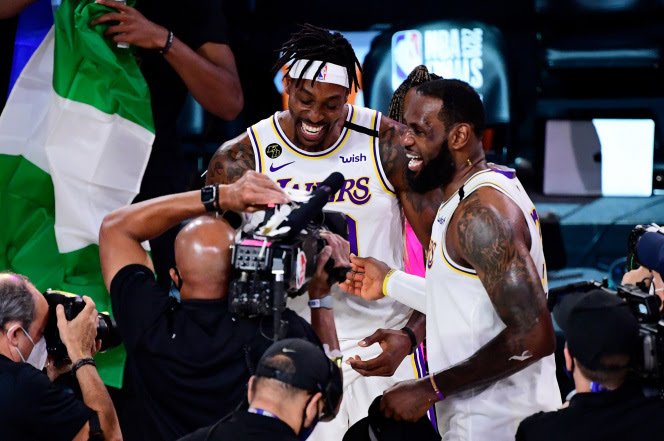 A shortened season was advantageous to a number of older Lakers. Rajon Rondo is 34, Dwight Howard 34, Danny Green 33 and Markieff Morris 31. And it gave a stronger likelihood of injury-prone Anthony Davis staying healthy..

1. I am not here to place a Phil Jackson asterisk on the Lakers’ 17th championship like the Zen Master did on the lockout-shortened, 1999 campaign. But let’s not get carried away with the rhetoric that LeBron James’ fourth title is more worthy because it was done amid 100 days in the NBA bubble, away from family.

James underscored that theme after the Lakers topped the Heat in Game 6 of the NBA Finals last Sunday, stating: “You wouldn’t be human if you didn’t have ups and downs in the bubble. At times I was questioning myself: Should I be here? Is this worth sacrificing my family?”
https://28adb9803a426df362a4ab24ce12d2ae.safeframe.googlesyndication.com/safeframe/1-0-37/html/container.html?n=0

In fact, the elderly Lakers saw their chances of winning the title enhanced by the restart format. The season was shut down for four months, allowing James to rest his 35-year-old bones. James didn’t play a regular-season game from March 10-July 30. A total of 71 regular-season games were played in the season, 11 fewer than usual.

A shortened season was advantageous to a number of older Lakers. Rajon Rondo is 34, Dwight Howard 34, Danny Green 33 and Markieff Morris 31. And it gave a stronger likelihood of injury-prone Anthony Davis staying healthy.

The grueling travel for a West Coast team was eliminated. In The Finals alone, a six-game series would have required James’ Lakers to enter the Eastern time zone twice. Wipe out the five-hour flights to and from Miami and replace it with a five-minute bus ride to their Gran Destino resort, and that’s one factor why James looked fresh as a daisy.

This wasn’t the usual physical grind of an NBA season. Even on charter flights, air travel takes a massive physical toll. The Lakers’ average age of 29.07 ranked as second-oldest in the league entering the season.

2. It’s not his most important decision, but I hope commissioner Adam Silver changes the dress code for NBA head coaches next season and forbids the sweatsuit look. It felt too much like summer league. Bring back the more dignified jacket-and-tie look. Or at least the jacket.

3. BetMGM sportbook lists the Nuggets at 20/1 (tied for ninth choice) to win the 2021 title. From the Western Conference, the Lakers, Clippers and Warriors are ahead of Denver, which made this year’s conference finals. It’s a young team getting better. Guard Jamal Murray looked like the NBA’s newest superstar. Nikola Jokic is already there. And Michael Porter Jr., selected 14th by the Nuggets in 2018, is going to get there, which will make Knicks fans even more miserable after their team passed on him to take Kevin Knox with the No. 9-overall pick that year. Michael Malone is an elite coach. At 20/1, the Nuggets are a terrific bet.
https://28adb9803a426df362a4ab24ce12d2ae.safeframe.googlesyndication.com/safeframe/1-0-37/html/container.html?n=0

4. The 76ers had a miserable bubble result, but Doc Rivers is the right new voice to revive “Trust the Process’’ and get Joel Embiid, Ben Simmons and Tobias Harris thriving. If the Knicks only knew Rivers would’ve been available …

5. Silver got a lot of credit for shutting out COVID-19 positives, but Chris Paul, president of the Players Association, deserves as much credit for keeping the players unified. “Chris saved the season,’’ one NBA source said in referring to the pause of play after the Kenosha, Wis., shooting of Jacob Blake in August. Don’t think Knicks president Leon Rose didn’t notice the leadership of his former client.

6. With Davis expected to opt out and re-sign with the Lakers, the smart play would be pass on a long-term package and execute a 1-and-1 deal. That would make him a free agent in 2021. He still gets to defend the crown with James, but provides insurance in case LeBron finally succumbs to age in a normal 82-game marathon.
https://28adb9803a426df362a4ab24ce12d2ae.safeframe.googlesyndication.com/safeframe/1-0-37/html/container.html?n=0

Lastly, Davis may want his “own” team. James garnered most of the buzz after the Lakers won the title — pundits analyzing whether his fourth ring or “one for the thumb” 2021 journey will stack up against Michael Jordan. It will never be an AD championship as long as James is alongside. The Knicks were once on “The Brow’s” radar. They should have cap space in 2021.

7. The Nets may wind up regretting that they passed on Tyronn Lue, who will now helm the Clippers. As one person close to Lue said recently, “There are many great things you can say about Tyronn, but if you really boil it down to one thing, it’s that he has no ego. And that personality is key with Kyrie [Irving] and KD [Kevin Durant]. Kyrie overthinks. And Tyronn doesn’t think too hard — and that’s not in a negative way.’’

8. Some teams are deciding not to partake in the loosening up of draft-preparation guidelines that will allow scouts to fly to a designated city with other clubs and watch a Pro Day-like live workout. Usually those Pro Days feature meaningless 1-on-0 drills. Some 1-on-1 interviews will be granted but with no guarantees. Some teams believe the COVID-19 risk outweighs the reward. New York has protocols that require two-week quarantines after returning from many states. One executive from a club that won’t attend told The Post the best intel is watching a prospect at his college practice. “Doing your own homework and own background checks are more important,’’ the executive said.

9. Hats off to Nets owner Joe Tsai. Without any events at which to sell them, Barclays Center donated 14,000 pounds of food Thursday from its arena to City Harvest, Food Bank for New York City and The Campaign Against Hunger. During the pandemic, the Nets helped feed 30,000 New Yorkers in need.

10. Reality Check Insights conducted a survey of 1,400 Americans on “Racing and Policing” and included an NBA question to measure if the league has become political. The findings, their research team found, is very much so. The survey showed 75.9 percent of Republicans rated the NBA as either “unfavorable/very unfavorable.’’ Democrats voted the NBA as 13 percent “unfavorable/very unfavorable’’ Independents came in at 37.7 percent.

“The just 13 percent of Republicans who rate the NBA as favorable is very similar to the percent of Republicans who had a favorable opinion of Black Lives Matter,’’ the poll’s researcher Benjamin Leff said. “People’s view of the NBA might be closely tied to the league’s posture on social-justice issues. Just like many parts of our lives, the NBA is now a political issue.’’

According to industry sources, it has become an agonizing issue for Silver after the NBA Finals ratings’ collapse. Silver has talked about less messaging on jerseys and the court next season. One source said: “It’s a balancing act for Adam. When you’re balancing, sometimes you fall.’’