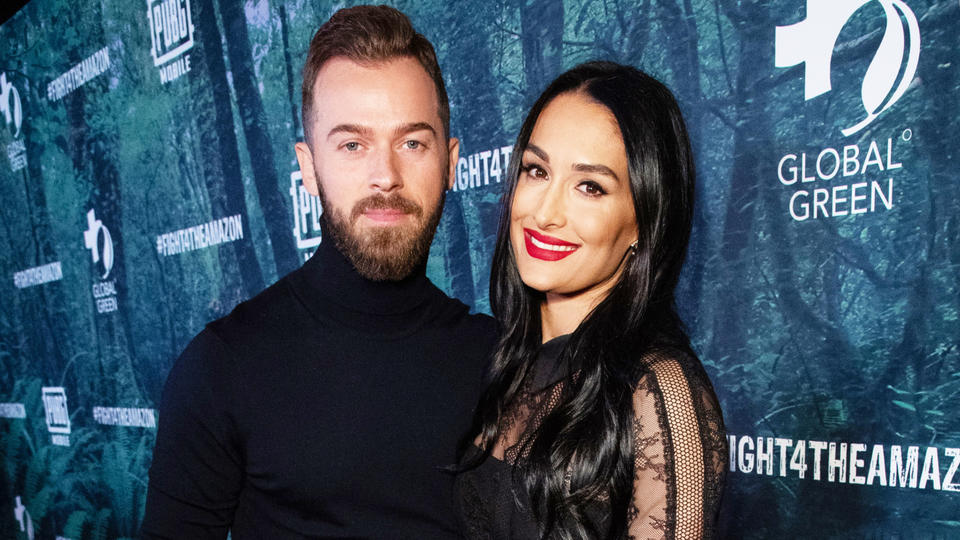 Brie Bella and Nikki Bella are just mere weeks away from their due dates, and before their little ones arrive, the twin sisters are doing everything they can to prepare—a process that’s naturally more easy for Brie, who already has a daughter with her husband Daniel Bryan.

Luckily, it sounds like things are falling into place for Nikki and her fiancé Artem Chigvintsev! On the latest episode of The Bellas Podcast, Nikki described how much fun they’re having gathering the essentials and extras for their baby boy, from clothes to nursery decor. There is, however, one item that the former WWE star has been unable to check off of her list.

Or, should we say, was unable to check off of her list.

“Can I just tell you all what Artem got me last week as a gift that I was, like, smiling so big?” Nikki asked listeners on the podcast, though it was Brie who answered, saying she hasn’t seen her sister “smile this big in weeks.”

Nikki began to explain that one day, Artem casually noticed her scouring the Internet for a particular diaper bag: “And okay, you all are about to be like, ‘This is so Nicole,’ but yeah I was looking at…Gucci makes really cute ones.”

However, the Gucci bag she wanted was on backorder and unavailable everywhere she looked.

Then, just recently, Artem came home with the exact bag in tow!

“Some of the girls were like, ‘You know it’s gonna end up with so much milk on it and this and that,'” Nikki said, acknowledging the high price tag after giddily describing the bag. “I am the pro at cleaning stuff! Look, I am the girl who rocked designer bags in a lot of bars and wine tastings. Now I’ve been spilled on and I’ve spilt, and I’ve always known how to get that s–t out.”

Brie—who noted her diaper bag only cost around $50—warned her that “there is nothing like a baby,” but Nikki wasn’t fazed. Instead, she went on to detail another item she and Artem recently bought for their future son.

“We got a lot of antiques for his bookshelf,” Nikki began. “And Artem kept wanting so badly this vintage ship…because Artem, the special moments he has from his childhood, [are of] him and his dad fishing.”

She continued, “It was really cute for me how persistent he was in wanting that in his room because of the memories he had with his dad and the memories he wants to build with our son. And that really melted my heart. It’s amazing when the man is hands-on. Artem is very good with that. Just so hands-on and excited. It just makes it all exciting.”

Nikki added that she’s especially excited to eventually find out what her son’s personality will be like.

“What I found interesting is, like, here we design our baby’s room before they’re even born; before we know them,” she explained. “And what I kept thinking was, you know what, I want to have a room that even as a baby—and I know people might think I’m weird—that he’s gonna daydream in, and it’s gonna motivate him and inspire him to be whatever it is he wants to be.”

Government Oweizide Ekpemupolo, popularly known as Tompolo, has made his first public appearance after hiding for six years
Photos and video of Tompolo have surfaced on social media in the last few days.

Some social media users have been speaking on the timing of Tompolo’s reappearance amidst the ongoing unrest in the country.

Tompolo, who led the disbanded Movement for Emancipation of Niger Delta (MEND), went into hiding in 2015.

At the time, the former militant leader was facing trial in an alleged N45.5billIon fraud case.

A picture of his appearance showed the former warlord and his friends dancing, worshipping, and offering Thanksgiving to Egbesu, an Ijaw god.

“Tompolo probably came out as part of their annual festivities. Make una no dey find war for where war no dey abeg.”

“Fear the name Tompolo but he’s not here to fight, do be calm but his appearance is a strong message to federal government.

“He’s the general commander of all Niger Delta militant. They need to fear him because he can cripple government under two days.”