We are delighted to reveal our new third kit for the 2020/21 season!

The new strip will be worn on the pitch for the first time when we kick off the Premier League season against Fulham on Saturday.

The kit will be worn by all our teams and is being launched alongside a ‘This Is Family’ film which sees Mikel Arteta deliver a heartfelt speech to the Arsenal community. He explains the importance of being part of the Arsenal family and what it means to him to be part of the club.

The film also features Women’s Super League Fans’ Player of the Year Vivianne Miedema and PFA Young Player of the year nominee Bukayo Saka, alongside legends Kanu and Dennis Bergkamp as well as fans from all walks of life and all parts of the Arsenal community.

The new shirt colours are intended to represent the lights and atmosphere that illuminate Emirates Stadium during a night match. The shirt pattern was created from a custom set of tie dye prints. 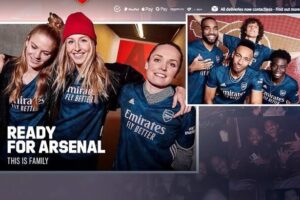 Related Topics:adidas.co.ukArsenal FcArsenal new kit out
Up Next