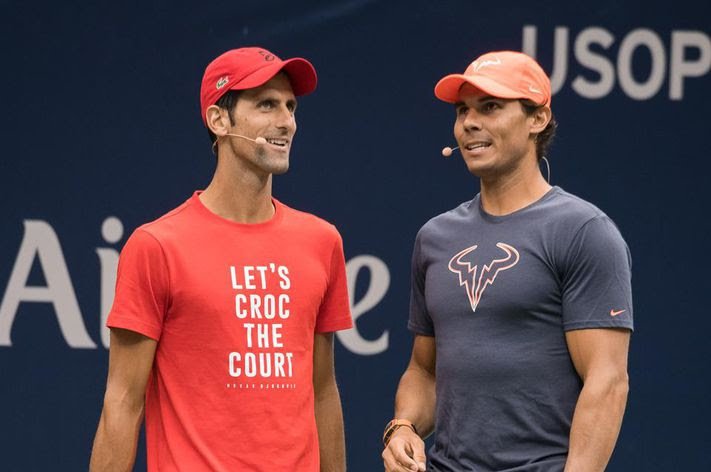 Djokovic will be the No. 1 seed and Nadal the 2 for the Western & Southern Open running Aug. 22-28 in the lead-up to the Open. The event was moved to New York from Cincinnati this year to create a tennis bubble at the USTA Billie Jean King National Tennis Center.

It is expected that both players will remain in New York and then play the U.S. Open Aug. 31-Sept 13.

There had been speculation that one or both players might skip the U.S. Open to focus on the French Open, which begins Sept. 27.

On the men’s side, Dominic Thiem, Daniil Medvedev, Stefanos Tsitsipas, Alexander Zverev, Matteo Berrettini and David Goffin round out the top eight seeds at the Western & Southern Open. Roger Federer, the all-time men’s leader with 20 Grand Slam titles, previously announced he was done for 2020 with knee surgery.

In Novak Djokovic’s words: ‘I can beat Rafael Nadal on clay’

Also absent among the top men are No. 9-ranked Gael Monfils and No. 17 Stan Wawrinka.

Serena Williams, the 23-time major champion who previously announced her intentions to play the U.S. Open, is the No. 5 seed at the Western & Southern. Karolina Pliskova, Sofia Kenin, Kiki Bertens and Belinda Bencic are the top four seeds.

Coco Gauff, who made a run to the fourth round of Wimbledon in 2019, highlights the group of American women that also includes Madison Keys, Alison Riske and Amanda Anisimova.

Among the top-ranked women missing the event are No. 1 Ash Barty, No. 2 Simona Halep, No. 5 Elina Svitolina, No. 6 Bianca Andreescu, the reigning U.S. Open champ, and No. 10 Naomi Osaka, the 2018 Open champ.

Thiem, ranked No. 3 in the world, said in an interview with CNN Sport it was “tough to imagine” the U.S. Open taking place without fans due to the pandemic.

Thiem, the 2019 French Open finalist, said he believes the Open will be “safe.”

“If it’s going to happen, I’m very sure that it’s safe, and I’m also going to play because it’s time that the normal tour is coming back.

"It was unfair to him because he didn't break any law and he didn't force us."

Dominic Thiem defends Novak Djokovic after the controversial Adria Tour and says he's looking forward to playing at this year's US Open.

Nadal has been practicing on clay in his native Spain and it appeared that he might skip the U.S. Open to focus on the French Open, which he has won 12 times. He’s already committed to the Madrid Open, which begins the day after the U.S. Open final. Now it’s clear he intends to play both events.

Djokovic was filmed training on hardcourts in Serbia and has said he would play the U.S. Open if he can skip the quarantine upon his return to Europe.

Djokovic was spotted in Spain this week without a mask even after he received criticism for his ill-fated Adria Tour on which four players, including Djokovic and Thiem, tested positive for the virus. Both have since recovered.

“It was obviously a mistake,” Thiem said of the lack of social distancing and the partying that went on during the Adria Tour.

“Everybody that tested positive is healthy again. I think everybody learned from that mistake….It was a mistake. Everybody regrets it of course but it’s time to look in the future.

Thiem feels Djokovic has been unfairly shamed and punished for his role in the Adria Toru.

“Of course it was unfair to him because he didn’t break any law and he didn’t force any player to come there,” Thiem said. “It was everybody, our own decision. The whole event was for a very good cause in general.”