Covering the most significant moments at Wimbledon since 1968 and the beginning of the Open era, Tennis World USA will bring the memories from the most celebrated tennis event, its big matches and the most memorable flashes over the last five decades.

We are starting with an eight-time champion Roger Federer and his record-breaking 101 triumphs at Wimbledon, coming to the fourth and one of the most memorable ones. On July 2, 2001, the future Wimbledon king Roger Federer took down the seven-time champion Pete Sampras 7-6(7), 5-7, 6-4, 6-7(2), 7-5 in three hours and 41 minutes in the fourth round! 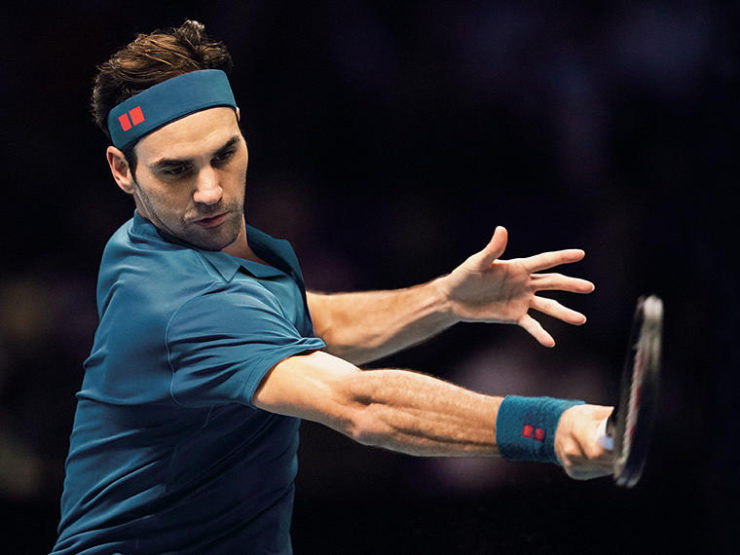 It was the first and only match between two of the greatest players of all time, with both making sure to make it a remarkable one, with the full attacking grass-court tennis that we would often miss on the sacred Wimbledon courts after that.

At 19 years and ten months, Federer was the upcoming star, heading to the All England Club after reaching the first Grand Slam quarter-final in Paris and winning the first ATP crown earlier that year in Milan. On the other hand, Sampras was not in great form that year, although he was always dangerous at these courts, chasing the fifth consecutive title and the eighth overall, hoping to add his name to the record books one more time.

It wasn’t to be for him on that day, though, losing before the quarter-final for the first time since 1991 and playing only one more match at Wimbledon a year later. Pete had 31 straight wins at Wimbledon and 56 in the last 57 encounters before Roger ended that streak, heading to Wimbledon with no wins and becoming the first player with a five-setter triumph over Pete in the cathedral of tennis.

Federer won ten points more than Sampras, fending off nine out of 11 break chances and delivering four breaks of serve from 14 opportunities to cross the finish line and dethrone one of the greatest players of all time. They hit 174 service winners in 370 points overall (89 for Roger, 85 for Pete), with 47% of the points not seeing a rally at all!

Also, 325 exchanges ended in the shortest range up to four strokes and the Swiss had a 170-155 advantage in those, doing more damage with the initial forehand or volley to forge the crucial difference. Pete had a 24-19 lead in the mid-range rallies with five to eight shots, not enough to carry him over the finish line, with only two points with more than eight shots, an excellent indicator of how fast the encounter was.

Roger needed a good start in his first match on the Centre Court, blasting four service winners in the opening game, followed by a similar answer from Sampras who leveled the score with four booming serves of his own. After three mistakes, the American faced three break points in the fourth game, erasing them in no time with five winners that kept him on the positive side of the scoreboard.

At 3-3, Federer had to play against the first break chance, staying calm to oppose it and remain in touch until the tie break where he saved a set point at 5-6 with a service winner, taking it 9-7 after an unforced error from Sampras for a massive boost.

In set number two, Sampras fended off all six break points he played against, stealing Roger’s serve in the closing stages to take it 7-5 and restore the order ahead of the remaining sets. Two double faults could have cost Roger a lot in the fourth game, landing three service winners to get out of jail and create two break chances in the very next game.

Sampras fired four winners to keep his serve unbroken, working hard at 3-3 to erase four break opportunities and gain a boost. Serving at 5-6, the young gun sprayed five mistakes that cost him dearly, handing the set to Pete and having to start all over if he wanted to cause an upset.

He did that in set number three, finding the formula to crack Pete’s serve and breaking him twice for a 6-4. Roger placed a return winner in game three to create the lead, staying in front only for a couple of minutes as Sampras broke back a few minutes later with three winners.

The American survived a break chance at 3-3 with a service winner before wasting a 40-15 advantage in the ninth game, spraying four errors to send Roger 5-4 up. In one of the essential games of the match, Federer clocked four good serves to take the set 6-4 and move closer to the finish line and brilliant triumph.

With no room for errors, Sampras raised his game in set number four, facing no break points and creating two at 4-3 that Roger dismissed with winners, reaching a tie break that the more experienced player won 7-2, leveling the overall score at 2-2 and sending the clash into a decider.

There, Federer managed to leave the drama and excitement behind him, dropping only six points behind the initial shot, four of those at 4-4 when he fended off two break points to avoid an inevitable defeat. “It feels unbelievable to beat Pete Sampras at Wimbledon.

I mean, I went out on the court today trying to beat him but I knew it was not going to be easy. I’m pleased with my performance today, from the first to the last point. It’s just a great feeling I’ve never had before.

I would say the return was the key factor of my victory because I had the feeling I had more chances than he did. Especially in the first three sets, I always had chances to break him but he came up with some big serves. Then, suddenly, I didn’t have any break chances in the fourth and fifth sets.

He was serving too good; maybe I was a bit passive on the returns in those moments but I’m still happy with my game. I felt excellent on the court from the start, since I won my first service game. That one is never easy to grab, especially after playing on the Centre Court for the first time, against one of my former idols.

I won it at love or 15 and that gave me a little boost to go into the match; the whole court was packed; there’s no way you’re going to stop fighting. Sometimes it was weird, looking on the other side of the net and seeing Pete, but that feeling went away at some point; you think about your serve, where you’re going to go, then it’s like playing against maybe some other player.

But obviously, it was something special for me to play against Pete.” Pete lost six points in the first five service games but that all changed when the pressure reached its peak, suffering a break at 15 in the 12th game after two return winners from Roger Federer that carried the youngster over the finish line and into the first Wimbledon quarter-final.

The Undertaker contemplating coming back for WrestleMania

All in all, it has been another fabulous year for World No.1 Novak Djokovic. One Grand Slam title, two Masters 1000 titles and he has consolidated his position at the number one spot in the ATP rankings. Djokovic is eyeing another record that he could match at the end of the 2020 season.

Djokovic now will most likely match Pete Sampras’ record of having the most number of year-end World No.1. Sampras has held the year-end number one ranking six times in his career. The ‘big 3’ of Novak Djokovic, Rafael Nadal, and Roger Federer are tied with five. So Djokovic could jump his arch-rivals and go equal with Sampras.

Novak Djokovic in the 2020 season till now

The Serbian jumped Nadal in the rankings early on in the season. After a bad Australian Open, Nadal lost a considerable amount of points and Djokovic won the Australian Open which helped him regain the number one ranking. After the season restart, Djokovic won the Cincinnati Masters which earned him points. Later he added the Italian Open and then by reaching the finals at French Open 2020, it helped Djokovic forge a huge gap from second-place Rafael Nadal. Djokovic is currently on 11,740 points to Nadal’s 9850.

Barring 2016, the big 3 have held the year-end number one ranking since 2004. In 2016 after a magical year from Andy Murray, the Brit held the number one ranking for the first time and ended the season ranked number one. He had won 9 titles including one Grand Slam title and he retained his Olympic gold medal at the 2016 Rio Olympics.

With the year-end number one ranking almost a certain for Djokovic, the Serbian has a longer goal of surpassing Federer’s record of most weeks as World No.1. Djokovic is into his 291st week as World No.1 and he is just 19 short of Federer’s 310.