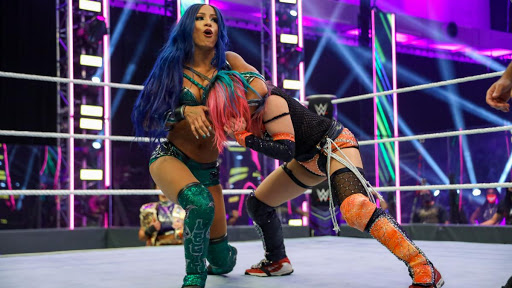 Sasha Banks beat Asuka by count-out on Monday night’s episode of Raw to win the Raw Women’s Championship in a rematch of their bout at Extreme Rules.

Asuka had Banks in position for the Asuka Lock but was suddenly faced with a dilemma. She watched on the video screen as Bayley attacked Kairi Sane backstage, so she could either save her friend or save her title.

Asuka chose the latter as she ran up the entrance ramp and tended to Sane.

The referee counted to 10, which meant Banks was not only the victor but also the new champion.

The attack by @itsBayleyWWE on @KairiSaneWWE backstage forces @WWEAsuka to check on her friend …@SashaBanksWWE is your NEW #WWERaw #WomensChampion via countout, and that means the #GoldenRoleModels have ALL THE GOLD! pic.twitter.com/aw8MgyDI7g

The Extreme Rules match between Asuka and Banks ended in controversy, as Asuka accidentally misted the referee, which resulted in Bayley stealing the referee’s shirt, counting the pin in Banks’ favor and allowing her to leave with the Raw women’s title in her possession.

On Raw the following night, Stephanie McMahon announced that Banks’ win was not official, and in an effort to determine once and for all who the real Raw women’s champion is, The Boss and Asuka would have another match on the show’s next episode.

McMahon also announced that if either Superstar were to get disqualified or counted out, the other combatant would be crowned Raw women’s champion women’s champion Bayley, who has been heavily involved in Banks’ matches and essentially helped her steal the championship at Extreme Rules.

Aside from the convoluted finish to the match at Extreme Rules, Asuka and Sasha put on an excellent bout that arguably stole the show. For those who have followed their careers closely, it came as little surprise.

Asuka and Banks haven’t wrestled each other much during their time in WWE, but it has felt special and important every time they have, and that feeling undoubtedly carried over to Monday’s title match.

With Raw struggling in terms of viewership in recent weeks, a big match with important stakes was needed, and WWE went all out by booking both Banks vs. Asuka and Drew McIntyre vs. Dolph Ziggler for the WWE Championship on Monday’s show.

Banks and Bayley have dominated the women’s division in recent months.

They co-hold the WWE Women’s Tag Team Championships and Bayley owns the SmackDown Women’s Championship, making the Raw women’s title the missing piece to the puzzle.

Sasha and Bayley’s plan to hold all the gold finally came to fruition Monday, and it begs the question of whether anyone will be able to knock them from their pedestal in the near future.

Becky Lynch Details The Process Of Discovering She Was Pregnant