With her cap pulled down over her eyes and hood firmly up, she may have looked to many like your average jogger in the park.But if Scarlett Johansson was not immediately recognisable, the skin-tight leggings and tight top at least suggest an A-list figure within.

The 25-year-old star was pictured leaving her local Los Angeles gym yesterday with her iPod and water bottle.Hours later she was transformed for an appearance on The Ellen DeGeneres Show.Scarlett jumped out of her skin and screamed as she was pranked by a man in a giant bumblebee costume on the programme.

The star was on the show to talk about her role as Black Widow in Iron Man 2 when the costumed prankster snuck up on her.Just as she began talking about hubby Ryan Reynolds, the giant bumblebee walked up behind Johansson and buzzed loudly in her ear causing her to jump and scream ‘You can’t do that on television,’ 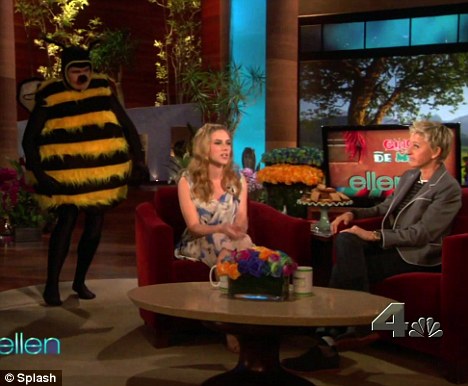 The startled actress said.’I’m terrified. I’ve just clammed up now – I don’t know what else is going to come at me.’Ellen then joked: ‘That’s fine, we’re done. It was a decoy to get the bee out here, you’re free.’

Related Topics:scarlette johansson
Up Next

Anne Hathaway praised by fans after sharing a forbidden post.