Amy Adams and her husband Darren Le Gallo looked as happy as the day they walked down the aisle while strolling around West Hollywood on Sunday.

The pair, both 45, kept it casual in sunglasses and jeans as they went to grab juice. 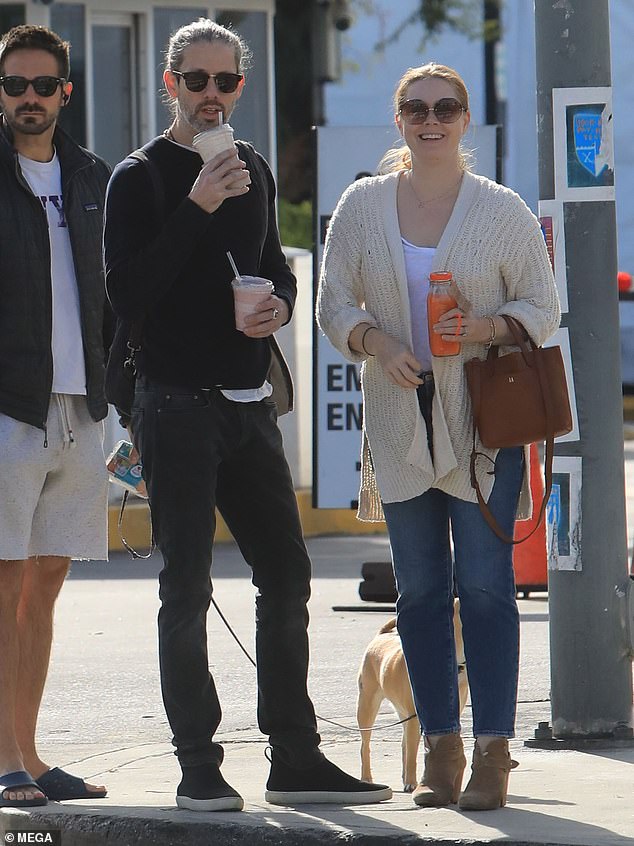 The Sharp Objects star beamed while walking arm-in-arm with her actor/artist husband.
Amy went for a comfortable look, donning an over-sized white cardigan and a matching t-shirt accessorized with a brown purse and coordinating booties.

The actress’ perennial plus one layered a white T-shirt underneath a black crew-neck sweater and a pair of sneakers.
The pair both pulled their hair back, as the Oscar winner kept her signature red locks in a long ponytail and her man rocked a styled man bun.

The couple were clearly enjoying each other’s company, as Amy gazed at her other half lovingly.
The couple, who share a nine-year-old daughter Aviana Olea, got engaged in 2008, but waited until 2015 to tie the knot in an intimate ceremony outside of Santa Barbara, California.

In 2013 Amy told Vanity Fair she wanted something ‘family-oriented and laid-back’ for the big day.

Despite the long engagement, the pair have always been deeply committed to each other.

‘We always had the commitment, but now he’s stuck with me and I can really act out. I’m kidding. The truth is, I feel a stronger sense of family, a bigger sense of permanence, which is a nice thing for me,’ she told U.K.’s The Times.
The lovebirds met during acting classes in 2001, but initially sparks didn’t fly.

‘I had another boyfriend, and Darren was dating some girl I did scenes with him, and I liked him and thought he was really sweet.’

She also joked, ‘I was really focused on the classes—he was a little scared of me.’

But, when they both appeared in a the short film Pennies together, they quickly started dating.
the family was all in attendance at the Trigg Ison Fine Art ‘From Destruction’ art exhibit in Los Angeles, as Darren’s artwork was featured.

The loving husband’s work is said to be influenced ‘somewhere between Surrealism and Expressionism, with the exploration of the subconscious mind, the mysteries of dreams and the human psyche as main themes, according to his bio on Triggison.com.

While the pair are both successful actors, the proud parents’ most important role is supporting their daughter.

‘It’s sexy to see him raising a girl and teaching her how a man should treat her in a lovely way,’ Amy told Marie Claire in 2018.
For her part, Cameron appears to still be very much in love with Doherty.

On Dec. 3, the star shared some adorable photos of her and her beau smiling together. In her caption, she gushed over the 24-year-old. As she wrote, “a rare smile cause this kids the love of my life.”

In April 2018, she told her fans that she very much intends to marry Doherty. That might change if Jennifer Lawrence is ever single again, though.