When a beautiful young woman loses her breasts, the last thing you expect her to say is that she’s delighted.But, believe me, I understand exactly why Angelina Jolie is overjoyed to have lost hers. I also completely understand why Brad Pitt claims it’s a happy day for their family.

Because I felt exactly the same when I became the first woman in Britain to have an elective mastectomy 20 years ago.
The truth is that no woman would choose to lose both her breasts – particularly a woman as flawlessly beautiful as Angelina – without having the most compelling reason.

But then, if you’re like Angelina and know that you stand an 87 per cent chance of developing cancer in those very same breasts, your priorities change in a heartbeat. And I understand the trauma that lies behind her decision. 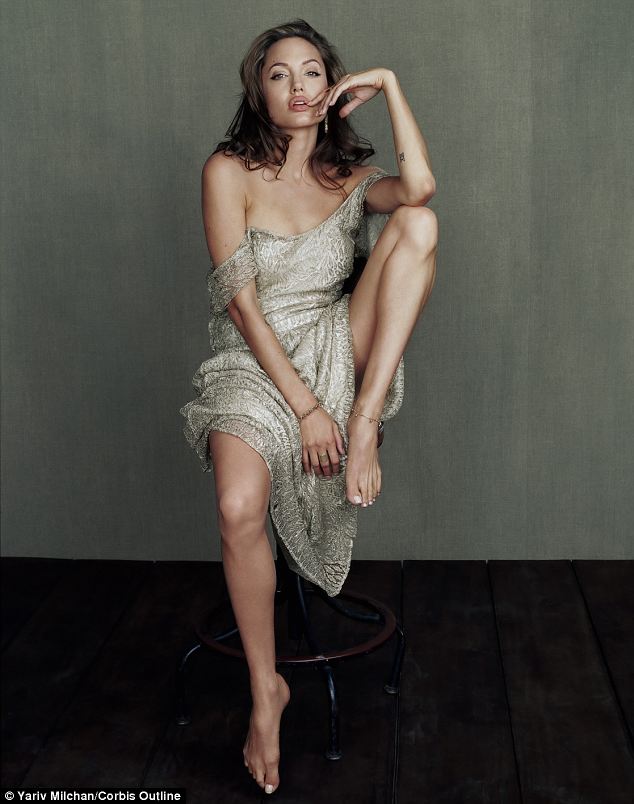 Like Angelina, I saw my mother die of cancer. Like Angelina, I vowed I would do anything to stop my little girl losing her mother. And, like Angelina, I was just 37 when I elected to have a double mastectomy in April 1993.The terrifying truth is that one woman in 200 carries a faulty gene which puts her at a high risk of developing breast cancer.

However proud you are of your body, if you are faced with losing your life, your breasts suddenly stop seeming that important. And – as Angelina proves – a mastectomy doesn’t stop you feeling feminine, looking beautiful or being loved by one of the sexiest men on the planet.
So while I suspect Angelina will be taking time to come to terms with her new body, I believe she will never regret her decision. She may occasionally mourn the breasts she has lost. But her overwhelming feeling will be relief, because knowing you are carry a ticking timebomb in your body is almost unimaginably frightening. 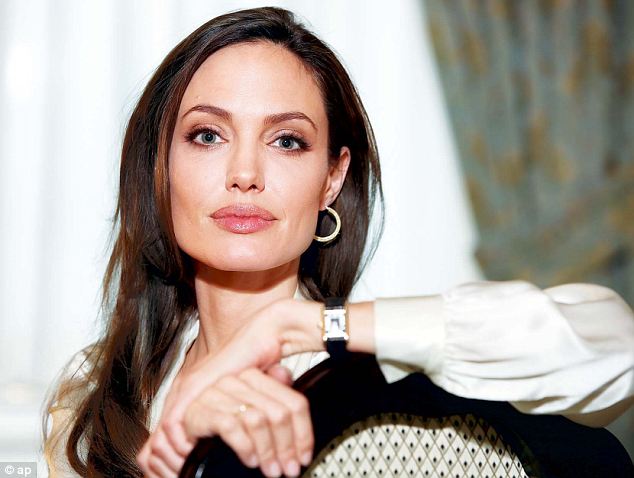 It’s especially chilling when you know that you have every chance of passing it on to your own children.

In my case, I haven’t just experienced the surgery myself, I’ve watched my own daughter, Becky, endure the same operation. Becky was 23 when she was told she, too, carried the BRCA1 gene. Knowing the sense of relief it brought me, I encouraged her to have a double mastectomy.

Now Becky, 31, is expecting a baby with her partner, Alex Menzies. Their child – they don’t know the sex – is due in July. The whole family will be thrilled if she is a girl. But there will also be the unspoken knowledge that one day, unless there are massive strides in cancer prevention, she will probably face losing her breasts. 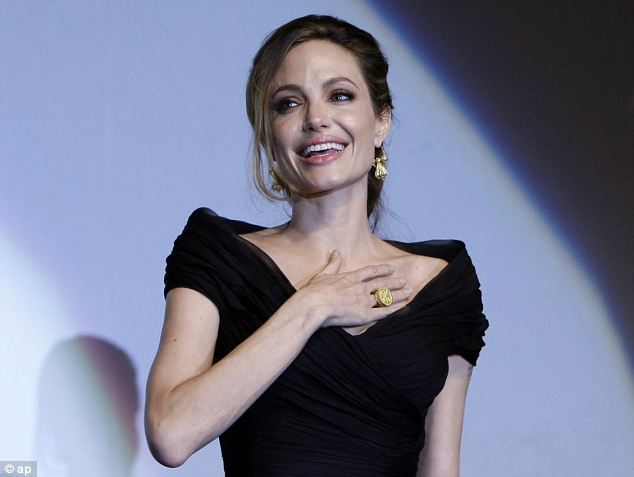 But the fact that an A-list celebrity like Angelina Jolie is making that tough journey helps make it more acceptable.

When I had my preventative mastectomy in the early Nineties, it seemed so extreme that even my closest friends thought I was totally mad.

If I’d said I was planning to grow two heads, they wouldn’t have been more stunned. And that made it all the harder.

But my decision was born of the knowledge there was a scenario far worse than losing my breasts.

I had a bust that most women would be proud of (I was a 38C cup) but instead of pride, I felt loathing and fear. I was so paranoid I might find a lump that I even refused to check them. 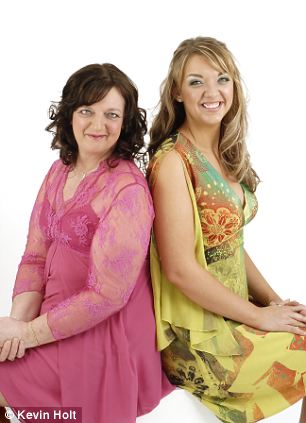 My fear deepened when Becky was born in October 1981. Would she be left motherless? I was convinced there had to be a genetic reason why so many women in my family were blighted by breast cancer but doctors dismissed the idea.

Everything changed in 1990. I had a chance meeting with a cousin, Jennifer Caudwell. My blood ran cold as she explained she had suffered two bouts of breast cancer in her early 30s. Her sister, Barbara Ayre, had died at the age of 38 and their mother, Lilian Holmes, had just developed breast cancer at 67.

Sick with dread, I plotted a family tree. It showed that, over three generations, nine of the ten females contracted breast cancer. Six of them died. Often the gene had been passed through a male relative.

When I showed my GP my bit of paper, he seemed as stunned as me and agreed to check my breasts every three months. Even so, I couldn’t shake off the fear.

I remember telling my sister, Diane, who later discovered she, thankfully, doesn’t have the defective gene: ‘I want to get rid of them right now.’

I was only 37, but I felt I had a death sentence hanging over me. And then, to my great excitement, the Family History Clinic opened at the University Hospital of South Manchester’s Nightingale Centre – not far from my home in Bakewell, Derbyshire – looking at genetic links in cancer.

Because of my family history, I was referred to Tony Howell, professor of preventative oncology. When I suggested having my breasts removed, he didn’t dismiss the idea out of hand.
In fact – extreme as it seemed – he was incredibly supportive. So was my new husband, Chris, a policeman. We had married in 1990 after my first marriage, to Becky’s dad, ended in 1986. And I knew that our love went so much deeper than whether I had breasts or not.

It may sound strange, but the thought of losing them didn’t worry me. I knew I wouldn’t feel less feminine. Rather, just like Angelina I felt I was empowering myself, and that felt incredibly exciting.

But friends were horrified. Their biggest concern seemed to be how Chris would cope, that he would drop me because I was no longer ‘all woman’. They asked: ‘Why not wait until you’ve got cancer?’

How can you explain to someone who’s never been there what it feels like to be stalked by fear every day of your life?

I had the operation in Manchester. I can vividly remember coming round after the surgery, looking down at my flat chest under the bedclothes and crying, not because I was sad but because I was so relieved.

The other women in the ward were recovering from surgery to stop their cancer spreading. Many had months of painful treatment ahead of them. All I had were a few scars and the knowledge that the danger had passed. I’d dodged the bullet. I felt incredibly lucky.

I was offered reconstructive surgery six months later, but I turned it down. Although I am totally flat-chested, I don’t mind a bit.

At 58, it’s who I am and I can’t imagine life now with a full bust. I rarely even wear any prosthetics to give myself shape, and yet no one seems to notice. I was so relaxed after the operation that I didn’t try to hide my naked chest from Becky. And I know that my ‘new look’ never worried Chris at all.

Things have changed since, however. Becky had a reconstruction at the same time as her operation. Indeed, Angelina says she is delighted with her own reconstruction which she had two months after her mastectomy. Her scars are so small, she says, she is happy for her children to see them.

A year after my operation, the gene test for BRCA1 was pioneered. The blood test confirmed what I already suspected – I had the faulty gene. I had made the right decision.

I desperately hoped that Becky wasn’t a carrier too. But it was a great comfort to know that, if the blood test proved positive, she, too, could elect to have a mastectomy.

We agreed that it was best for her to wait until she was old enough to deal with the consequences of any bad news.

In January 2004, when she was 22, she took the test. I held her hand as we sat in the consultant’s room when she learned that, like me, she had an 87 per cent chance of developing breast cancer.

Of course, we were upset. But Becky knew what she was going to do. She booked a double mastectomy for January 2006 – giving her plenty of time for counselling and to adjust to what lay ahead.

I felt desperate I had passed this faulty gene on to her. But I was immensely proud of the way she coped: she refused to feel sorry for herself. Although they were so young, her friends were wonderfully supportive and three days before the operation threw a ‘Saying Goodbye to Becky’s Boobs Party’.

When I saw Becky after her surgery and reconstruction, I burst into tears. The surgeon had built Becky new breasts, and they looked so lovely.

Our shared experience has brought us even closer. As Angelina shows – losing your breasts isn’t an end. For those of us who carry BRCA1, it’s the start of a wonderful new phase in our lives.

Related Topics:Angelina Jolie
Up Next

Cameron Diaz regrets it says:”It was embarrassing, and I did everything I could think of to make it go away”

Charlize Theron Says She needs a confident man to ask her out…She is ready to date:says “I’m shockingly available”.