Serena Williams enjoyed her best start at this year’s US Open on Thursday but it was a familiar foe, Victoria Azarenka, who finished the stronger to halt her  quest for a record 24th grand slam title.

Blown away in the first set by Williams’ serves and powerful, accurate drives, Azarenka rallied for a 1-6 6-3 6-3 victory as the women’s semifinals in New York hit lofty heights.

Not helping Williams’ cause was injuring her left Achilles in the second game of the decider, prompting a rare mid-game medical timeout. Williams, though, said the injury didn’t bother her thereafter.

With the roof closed on Arthur Ashe Stadium due to rain, and no fans inside the largest regularly-used tennis stadium in the world — capacity of around 24,000 — their thunderous ground strokes sounded even louder.

Saturday’s final will thus be a rematch of the warmup Western & Southern Open, also played on the site of the US Open as part of the tournament bubble, rather than the 2018 US Open final, when Osaka overcame Williams in a controversial finale for a maiden major.

Entering and exiting the court this fortnight, Osaka has worn a mask with the names of Black people who have died in incidents with police. This time she honored Philando Castile.

The fans have been kept away as part of the bubble during the coronavirus pandemic and who knows if their support would have prompted yet another comeback this fortnight from the legendary Williams.

What is known is that this is the ninth occasion the 38-year-old American has come up short trying to match Margaret Court’s all-time record of grand slam titles.

“It’s obviously disappointing,” Wiliams told reporters. “At the same time, I did what I could. I feel like other times I’ve been close and I could have done better. I felt like I gave a lot.”

Such was her determination to land No. 24, before the tournament Williams built a tennis court at her home in Florida with the same surface as the US Open.

In normal circumstances, the US Open would mark the end of the grand slam calendar and usually Williams’ season.

With schedules tweaked this year due to the pandemic, though, the French Open begins in just over two weeks.

Historically it has proved to be Williams’ most difficult major in terms of titles but she plans on making the trip to Europe. She owns an apartment in Paris and enjoys playing on clay.

I’m definitely going to be going to Paris,” she said.

Williams barely put a foot wrong in the opener, only dropping two points behind her first serve and tallying four more winners than unforced errors.

But up against it, Azarenka hung on in her first service game of the second by saving a break point.

Azarenka gradually lifted her game and Williams didn’t win a point behind her second serve in the second set.

Williams was now on the defensive and needed to hold firm in her own first service game of the third. A 40-0 lead faded to 40-30. She then tweaked the Achilles while surrendering the next point and called for the trainer.

Upon her return, Williams was broken to trail 2-0.

“It just overstretched,” she said. “It was pretty intense.” Later she added that it had nothing to do with the final result.

“It didn’t affect my play ultimately at all, just for that one point. I’m fine.”

Azarenka has tested Williams in previous tussles but this marked her first win in 11 tries in grand slams.

Heading into last month, few would have predicted it. A former world No. 1, Azarenka didn’t win a match for a year, until the Western & Southern Open, to leave her unseeded at this US Open.

She has endured a bitter custody battle revolving around her son, Leo, suffered injuries and contemplated retirement.

The Belarusian last won a grand slam title, at the Australian Open, and last a made a grand slam final, in New York against Williams, seven years ago.

“Mentally I’m in such a different place,” the 31-year-old told reporters. “I think seven years ago, after I won the Australian Open and stuff, and playing kind of consistently with good results, it was kind of expected for me to be in the final. I don’t think that was the case this year.

“But it feels more fun this year, more fulfilling, more pleasant for me. It feels nice, nicer.”

The straight-talking Azarenka said that getting her ego bruised was precisely what she needed to grow.

“The best tools were me losing a lot of matches,” she said. “That was the biggest tool that I could get. I could continue to stay on my high horse or I could just change it and learn from that.

“I just feel I’m very proud of myself that I took that challenge up from losing and turn it around and become better. I’m not talking about a better tennis player.

“I’m talking about a better person for myself, for my son. That’s what I’m most proud of.”

Ironically, Williams’ coach, Patrick Mouratoglou, played a part in Azarenka’s victory. He helped to set up Azarenka’s new entourage, including coach Dorian Descloix, after she trained with Williams and others pre-season in Florida.

Away from the court, Azarenka sang Karaoke with Williams. 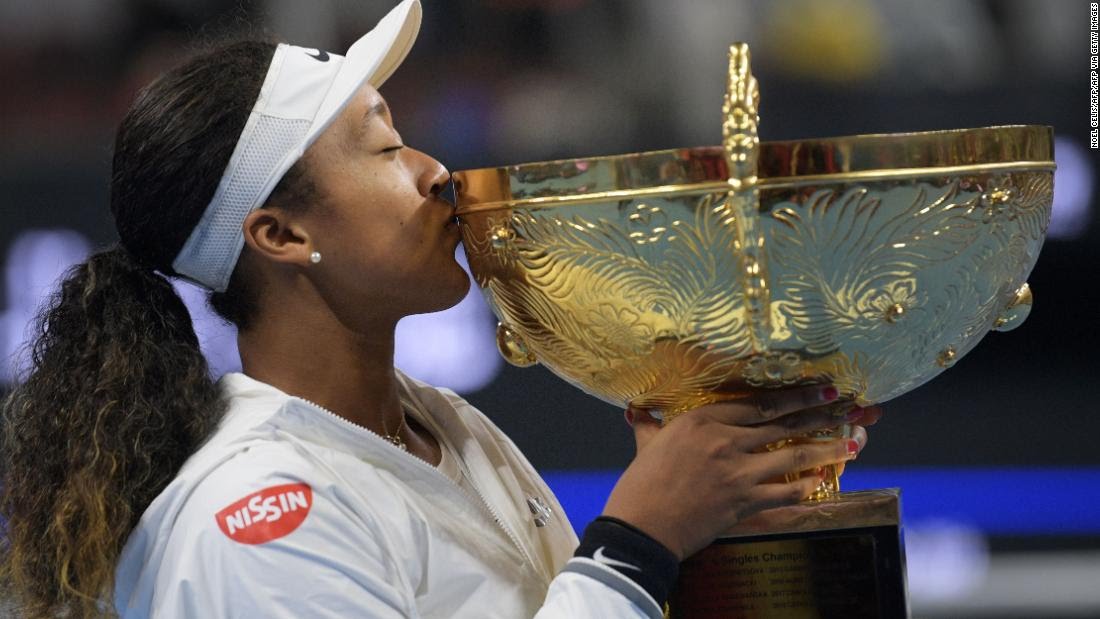 “She’s had a lot of, I would say, downs in her career,” said Williams. “She started on a lot of highs.

“I don’t know how she stayed positive. That’s a good lesson for all of us. No matter what, you just got to keep going. Hopefully she keeps living her dream.”

The perfect ending to the dream would be winning Saturday’s final against Osaka. A hamstring injury forced Osaka — who represents Japan but, like Azarenka, is based in the US — to withdraw from the Western & Southern final so the conclusion never took place.

Osaka and Brady each hit 35 winners and only made a combined 42 unforced errors. But Brady dipped ever so slightly in the tiebreak.

Leveling to take it to a decider, the American was broken for the lone time at 1-2 in the third. Brady didn’t challenge her shot that was called long, even though replays showed the ball to be good.

Osaka didn’t face a break point in the third.

“I’m sure this time we’re going to get to play and it’s going to be a great match,” said Azarenka as she looked ahead to the final. “She’s won two (grand slams) already. Aren’t we both looking for a third one?”

Indeed they are. For Williams, the hunt for 24 will have to wait until Paris.