Maria Sharapova overcame years of injury struggle to come full circle at Roland Garros in 2012, capturing her fourth major title for a box set while reclaiming the top spot on the WTA rankings. 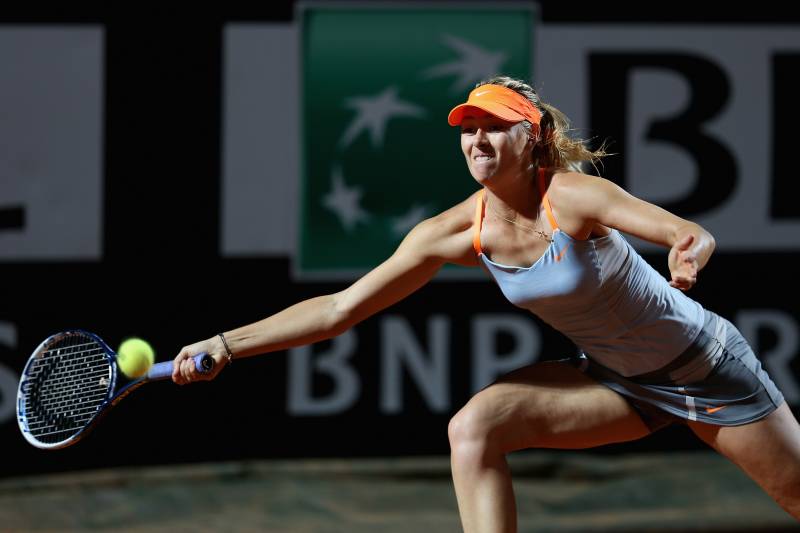 Welcome to French Open Flashbacks, where wtatennis.com will take a look back at some of the most memorable narratives from Roland Garros over the past 20 years. After recapping Charleston’s classics, Stuttgart’s standards, Madrid’s magic moments, and Rome’s records, our retrospective heads to the culmination of the clay season in Paris – up next is Maria Sharapova’s Career Grand Slam fulfillment at the 2012 French Open.

THE MOMENT: Maria Sharapova was at the forefront of the Russian Revolution occurring in the women’s game. Weeks after Anastasia Myskina surged into the history books by winning the 2004 French Open, Sharapova backed up the hype with a stunning Wimbledon fortnight.

Her star continued to rise in the years that followed; by 2008, she was ranked World No.1 and had added the US and Australian Open titles to her trophy case. Success on clay, however, continued to elude her – something that was no secret to the 6’2″ Sharapova.

“I feel like a cow on ice,” she famously said after a second round win over Jill Craybas in 2007. Though she lost just three games to Craybas that day, Sharapova rarely did look like a contender for the Coupe Suzanne Lenglen, losing that year in the semifinals to Ana Ivanovic (winning only three games).

Where she lacked in technical prowess she made up with force of will; when she returned to tennis after shoulder surgery, she battled into the quarterfinals with an abbreviated serve and just two wins in 10 months.

A year later, she pushed four-time French Open champion Justine Henin to the brink in a match that unlocked the player many would come to call “Claypova.”

By 2012, Sharapova had become the tour’s premier force on the terre battue, arriving in Paris having won titles at the Porsche Tennis Grand Prix and Internazionali BNL d’Italia. She flew through her first three matches – dropping a 6-0, 6-0 scoreline on Alexandra Cadantu for her opening salvo – and survived a rainy weekend clash with Klara Koukalova to reach the quarterfinals.

Playing to recapture the No.1 ranking for the first time in four years, she avenged an Australian Open defeat to Petra Kvitova – who had also stopped her in the 2011 Wimbledon final – to find herself on the precipice of a Career Grand Slam.

The Russian showed few nerves in taking on surprise finalist Sara Errani, and secured her fourth major title with a brand of clay court power tennis that would define the decade.

But how? How had a surface that once minimized her strengths and exposed her weaker movement become her best? It all comes down to the serve. When persistent shoulder injuries affected the Russian’s once-reliable delivery, her game underwent subtle shifts that turned her from the teenager who took Wimbledon by storm into the adult able to succeed on all surfaces.

“I never really went about my career thinking I had to prove something. I think it’s more about proving to yourself than the outside world, expecting things from what you believe you can achieve,” she said of the Career Grand Slam.

The legend of “Claypova” lived on, and though she lost the title to 23-time Grand Slam champion Serena Williams in 2013, she regained the championship the following year. In what would be her fifth and final major title, she outlasted rival Simona Halep in three grueling sets, roaring through the final eight points of the match.

“You’re not just born being a natural clay‑court player,” she said in 2014. “Okay, maybe if you’re [Rafael] Nadal, but certainly not me. I didn’t grow up on it; I didn’t play on it. I just took it upon myself to make myself better on it. There is no one else that was going to do that for me. I had to do the work.”

Governor Nyesom Wike of Rivers has signed an executive order to reinforce the ban on the Indigenous Peoples of Biafra (IPOB) and its activities in the State.

He made this known in a statement by Mr Kelvin Ebiri, Special Assistant (Media) to the Governor.

Ebiri stated that the governor, in a broadcast on Wednesday night in Port Harcourt, maintained that Rivers remains the home to all tribes and ethnic nationalities.

He said that the government acknowledges and appreciates the enormous contributions from non-indigenes to the political, social and economic development of the State.

According to the statement, the State Government will neither accept nor allow any individual or group from within and outside to violate the peace, endanger lives and property under any guise.

It stated “the State government is opposed to the presence and activities of the legally-proscribed and anarchic IPOB and whatever it stands for in Rivers State.

“And so, let it be understood that we have nothing against all or any specific tribe and will continue to live in peace with people of all other tribal extractions residing or doing business in Rivers State.

“But we have everything against the presence and activities of the legally-proscribed IPOB and whatever that group stands for in Rivers State,” the governor warned.

This is clearly a terrorist group which existence, creed, mission and activities are strongly denounced even by the Government and peoples of South-Eastern States of the country.

“I have, therefore, signed the executive order to reinforce the total ban on IPOB and its activities in Rivers State or any part thereof and nothing will stop us from enforcing this ban in its entirety,’’ he said.

The statement also added that Wike also “directed security agencies and the Chairmen of Local Government Areas to fish out and resolutely deal with any member of IPOB found in any community following the executive order and other legal instruments’’.

The governor also announced the lifting of existing curfew on Mile 1; Mile 2; Iloabuchi; Emenike; and Ikokwu areas of Port Harcourt as well as Rumukurushi in Obio/Akpor Local Government Area.

In the quest to restore sanity and enhance free traffic flow in roads in the State, the governor said he will constitute a task force to enforce the ban on illegal street trading and the emergence of motor parks along public roads.

He also stated that, in the interim, he has approved the ban on the operations of tricycles, also known as `Keke NAPEP’, on all major roads in Port Harcourt and Obio/Akpor Local Government Areas.

Wike also directed the State Civil Service Commission to take immediate steps to employ 5,000 youths into teaching and other career positions in the State’s Civil Service.

He said such steps should be taken as an immediate measure to reduce the level of youth unemployment.