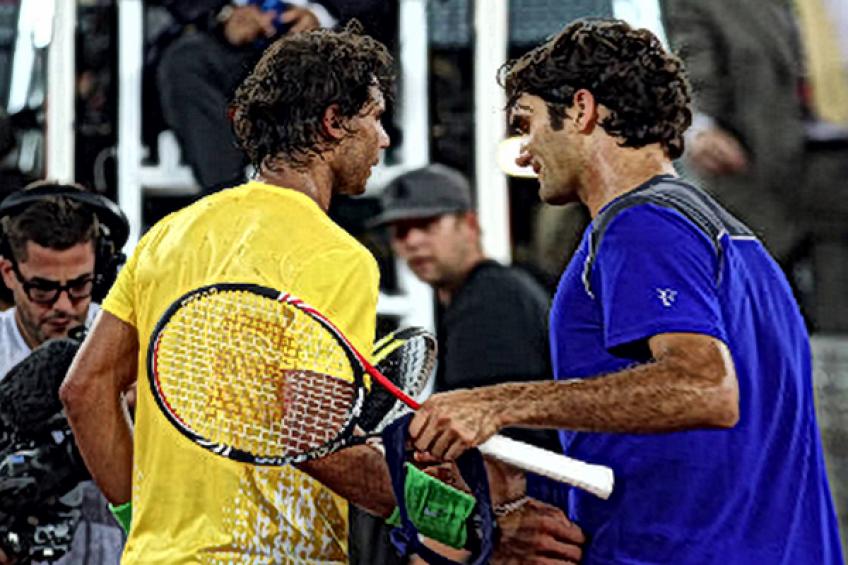 In 2009, Madrid Masters 1000 event switched from October to May and from indoor hard surface to clay, gathering the world’s leading players at Caja Magica. In the first edition, Roger Federer defeated Rafael Nadal in the title match, with the Spaniard serving revenge a year later to lift the trophy in front of the home fans.

In 2011, Roger and Rafa had to meet in the semi-final, reaching the last four together with Novak Djokovic and battling for the place in the final against the mighty Serb who was yet to lose a match that year. After two hours and 36 minutes, Nadal prevailed 5-7, 6-1, 6-3 for the third straight Madrid final, bouncing back after a tight opener and leaving Roger behind with a strong pace in sets two and three.

It was their 24th meeting on the Tour and the 16th triumph for the Spaniard who conquered 11 of 13 encounters on clay versus the Swiss. Landing 81% of the first serve in, Nadal fended off nine out of 11 break chances, securing five breaks from 12 opportunities to control the scoreboard in the second part of the encounter to propel himself over the finish line.

Rafa had more winners than unforced errors, taming his shots nicely and earning a massive advantage in the shortest range up to four strokes to forge the victory. Federer was in touch in the more advanced exchanges but his initial shot and the first groundstroke after it let him down completely, especially in set number two.

Trying to keep the points on his racquet, Roger had almost 40 winners but also more than 40 unforced errors, unable to defend his backhand in the way he would have wanted and losing steam after a reliable performance in the opener.

Nadal grabbed a break in the first game following a loose backhand from the Swiss, landing an ace to bring the next game home and confirm an early advantage. The Spaniard survived three break points in the fourth game, closing it with a volley winner to remain in front and squandering a break chance that could have sent him 4-1 in front.

Instead of that, Roger forced an error from Rafa in the eighth game to pull the break back, defending two break opportunities at 5-5 with powerful forehands and finding the angles with his backhand on the return in the next one to grab a break after a forehand down the line winner, securing the opener 7=5 after challenging 64 minutes.

Rafa opened the second set with a break thanks to a forehand winner, fending off a break point with a service winner a couple of minutes later to cement the advantage and open a 2-0 gap. The Spaniard had the upper hand in those moments, delivering another successful return game that sent him further in front and firing three winners in the closing stages of the next service game to erase two break points and eastablish a 4-0 lead.

Federer wasted a chance in the sixth game as well before spraying a backhand error on serve to suffer a break and hand the set to Rafa who had the momentum on his side after those commanding 6-1. Roger sprayed a backhand mistake to waste a break chance in the third game of the final set, suffering a break in the next game and allowing Nadal to forge a 4-1 advantage after a hold at love.

Serving for the victory at 5-3, Rafa had to play against a break point following an incredible rally and a drop shot winner from Roger who netted a return in the next point to squander a massive opportunity before Nadal sealed the deal two points later for the third straight Madrid final and the 28th at the Masters 1000 level overall, still at 25.