AFTER 37 games, a three-month hiatus and the crowning of worthy champions, it all comes down to the final day.

Liverpool lifted the Premier League trophy at Anfield on Wednesday following their entertaining 5-3 win over Chelsea, but despite the title being decided there’s still plenty riding on the final day of competition.

No more so than at the King Power Stadium, where almost a year of hard work for Leicester comes down to one game.
Leicester vs Man Utd (Sunday, 4pm)
It’s a straight shoot-out in LE2 for a Champions League place.

Regardless of Leicester’s form since football returned, this has been a superb season for Brendan Rodgers and his side.

They’ve finished 9th in the last two but have produced another campaign above their pay-grade, again mixing it with the big boys – and qualification is in their hands.

After Man Utd were held to a draw by West Ham in midweek, the Foxes can leapfrog Ole’s men into the top four with a victory.

The other situation is simple – if United avoid defeat, it’s mission accomplished for them as they line-up in next year’s premier European competition.

A week ago we’d have been all over the visitors in this once, with Bruno Fernandes and Paul Pogba looking the business and United on a long unbeaten run.

But after a pretty dismal loss to Chelsea in the FA Cup – which saw Solskjaer tinker with a winning formula – suddenly his team looked jaded and disjointed as West Ham frustrated them at Old Trafford.

We’ve definitely seen that before. 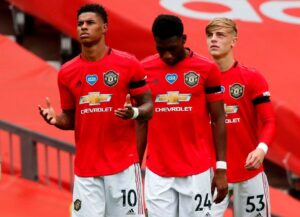 The sheer amount of games in this mad mini-season from June 17 looks to have caught up with the Red Devils and they’ll have to summon a real effort here to grind out a result.

Leicester are hampered by injuries at the moment and will be without James Maddison and Ben Chilwell, as they were in the 3-0 loss to Tottenham.

The young England pair are big losses for the Foxes and losing Maddison’s creativity in the No10 role is a sickener at this stage.

United will have had a wake-up call against the Hammers are we’re taking them to beat Leicester and secure third-place in the table.

After three-straight wins on the road without conceding, you’d expect them to be odds-on.

But grab the 5/4 on a United win with both hands and don’t let go – what a price that is.

Marcus Rashford’s penalty was the decider between the sides when they met before Christmas, but we expect a more open game despite what is at stake.

the net on Sunday.

They’ve scored in five of the last seven home H2H’s with United and with David De Gea all over the shop at the minute, the 2/3 on both teams to score is banker material.

If you want to play things a little safer, United to score two or more goals is a whopping 21/20.

Again, that really should be an odds-on shot with the Red Devils scoring eight in three away matches since the league resumed.

Should Leicester be forced to play the ageing duo of Wes Morgan and Ryan Bennett in defence again, expect the speedy Rashford to thrive.

The England forward is a cool 9/4 to score anytime and while he didn’t have a great game against West Ham, he does have history here, netting the winner last season.

Related Topics:Head to Head Man united vs Leicester 4pm today
Up Next