Becky Lynch sits on top of the mountain as the longest reigning title holder of WWE’s main brands; with an almost 400 day reign. And while she enjoys the continued success, it isn’t easy to highlight many distinguishing features of her time as Raw Women’s Champion. This article takes a look at why this is, along with ways WWE could give her character a much-needed shot in the arm. In order to do this though, we need to roll back the clock. What was ‘The Man’ Becky Lynch like before she rolled up Ronda Rousey at WrestleMania? How has her character changed? 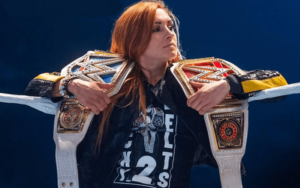 A couple of years ago, Becky was chasing after the SmackDown Women’s Champion Carmella. She was the #1 draft pick, and while she was liked, she became somewhat of an afterthought (like Bayley as The Hugger). Nevertheless, fans wanted her to be champ while Charlotte Flair lorded over Raw. That was of course, until The Queen switched brands. Lynch accepted Flair being shoehorned in to the triple threat as it would cement her position. However, the victory didn’t occur at SummerSlam and Becky viciously turned on her “best friend”.

Becky aired her frustrations a few nights later, not only with Charlotte, but with the WWE Universe for not showing her enough support (she felt screwed out of her one-on-one match). While Becky got some jeers, they were soon drowned out by cheers after she shared her thoughts on Flair behind handed everything. ‘The Man’ was born from this frustration after toeing the company line for so long. After all the hard work, she was finally coming out of her shell and telling us how it is.

This promo resonated because it sounded real, almost as if it was coming from the mouth of Rebecca Quin. It felt good to hear someone straight up telling management how unfair it was for Flair to be given preferential treatment. Fans often share the hypocrisies within WWE among themselves, and they finally had a voice (the first since CM Punk) to air their distaste with how management books shows. While Lynch was giving it to her fans just as much, it was negated because her newfound freedom to express had an exciting upside. But yeah.. has she done anything like it since nailing this breakout moment? I don’t believe so.

Baddest Woman On The Planet

Their rivalry reached the next level when Becky defeated Charlotte for the title a month later. Becky got her payoff when she won ‘Last Woman Standing’ at Evolution. WWE thought that would be enough.. but then Nia Jax stiffed Lynch during SmackDown’s invasion of Raw. The bloodied face moment suddenly transformed her in to a Steve Austin-like anti-hero. Becky was seen as a badass, but not enough of one to retain against Asuka in a triple threat with Charlotte at TLC. And again, she wasn’t tough enough to claim it back in their return match at the Royal Rumble.

We know she needed to move on to Raw, but tapping out clean to Asuka showed her vulnerability. Becky had to be screwed here, but WWE figured they could cover it by having her win the Rumble an hour later; after stealing Lana’s #30 spot. Not only did this undermine the rest of the talent, but it was announcing her place at WrestleMania too soon. They had Becky play up a storyline injury and relinquish her place to Charlotte; but it was painfully obvious she’d earn it back. And most fans never wanted a triple threat, they wanted either: a) versus Rousey to prove who the baddest woman on the planet is, or b) The Man vs. The Queen to bring their long-time rivalry to an emphatic close.

Making it a triple threat complicated matters, but it wasn’t the only thing going against them. While being announced as the first women’s main event was historic, it piled on extra pressure to perform. Also, it was asking a little too much of the WWE Universe, to expect everyone to be awake enough to care after sitting through a +7 hour show.

The way she won both women’s championships at WrestleMania remains questionable. There were reports that the finishing roll up was botched, and assumptions lead to what many considered a logical step toward a singles encounter between Ronda Rousey and Becky Lynch. The match never happened though (Ronda went home), so her triumphant WrestleMania victory will always be tainted because ‘Becky 2 Belts’ never proved herself over Rousey.

To add another layer of fishy booking to the cake, WWE decided she would lose the SmackDown Women’s Championship a month later to Charlotte at Money In The Bank. Becky had to work double duty as she first retained the Raw title against Lacey Evans. Immediately after this, Becky demanded her match with Charlotte; in what can only be deemed an overly brash move. A combination of Evans (who interfered despite submitting minutes earlier) and Charlotte ensured she would lose the title in little over six minutes. WWE figured by having Bayley cash in Money In The Bank on Charlotte, that everyone would forget what had transpired and celebrate a new champion crowned.

What they failed to realize, is that ‘The Man’ character spawned from the frustrations of The Queen always getting the upper hand. Becky had to resign herself to the fact that she isn’t who she claims to be. The crowning at WrestleMania was more of a fleeting moment than anything designed to be long-term; and it was Flair doing the spoiling once again. Despite the clear interference, and beating Bayley only a few weeks before, she never did get a rematch for the SmackDown title. Effectively, this was the beginning of a metaphorical vasectomy for ‘The Man’. She was losing her balls, and nothing could stop the inevitable tenure of mediocrity.

According to her known match records from profightdb, in over 13 months she has wrestled 34 times on television. This equates to an average of less than two times per month. 16 of those were as part of a tag team. What is interesting to note, is that WWE tried partnering her up with her boyfriend Seth Rollins. This happened only three times before WWE backtracked on what was obviously a mistake. And despite feuding with her rival Charlotte for over eight months, they put all the animosity to one side and formed a tag team a few months later. They paired up together eight times and unsuccessfully challenged for the tag titles three times.

Including dark matches and live events, Becky has defended the Raw title 17 times. Her challengers include Lacey Evans (5), Asuka (5), Natalya (3), Alexa Bliss (2), Sasha Banks (2), Charlotte Flair (2) and Shayna Baszler (1). Only two of these were in special matches, which include a steel cage (vs. Flair & Asuka) and Hell In A Cell (vs. Sasha).

Rafa Nadal and I have had our differences, but he’s an absolute champion,’ says Nick Kyrgios

Nick Kyrgios admits that he and Rafa Nadal have ‘had their differences’ over the years but he can’t help but admire his achievements.

Nadal won his 20th Grand Slam crown at Roland Garros earlier this month to draw level with Roger Federer in the history books.

Kyrgios has a bit of a storied past when it comes to spats with Nadal, who he once branded ‘super salty’ whilst accusing him of being a bad loser.

Even he, though, can’t deny the Spaniard has achieved something special.

“I wasn’t surprised when I saw Rafa Nadal pretty much easing his way through the draw at the French Open,” Kyrgios told Courtside Huddle.

“That’s his backyard, he loves playing there and he has only lost two matches in his entire career.

“Honestly, in my opinion I don’t think we are going to see anything like that ever again.

“Somebody so dominant on a surface he’s right there with the greatest of all time. You can argue that he is the greatest.’

“You look at Federer, he’s the most dominant player of all time, but in this era it’s actually Rafa. It’s a debate you can have.”

“We had our differences when we played each other. We’re fiery, we’re competitors and are going to go after each other.

“But at the same time I am not going to take anything away from him . He’s an absolute champion and 20 Grand Slam is ridiculous and I don’t think we are ever going to see that again.”