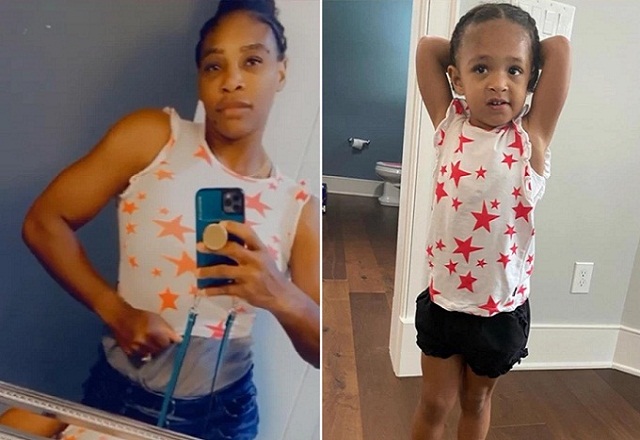 Alexis Ohanian got psyched out by his three-year-old daughter, Olympia! Watch the video of Serena Williams’ ‘mini-me’ faking out her dad as he moves in for a high-five!

Serena Williams‘ three-year-old daughter, Olympia, has some tricks up her tiny little Nike sleeves! The adorable daughter of Serena and Alexis Ohanian was captured pulling a fast one on her papa in a new video Serena’s husband, 37, shared to Twitter.

In the clip, the 23-time Grand Slam champion, 39, could be seen whispering something to her youngster before saying, “Olympia, high-five!”

As Alexis motioned his hand towards his daughter, Olympia pulled her hand back! Serena and Alexis laughed hysterically, and Olympia was clearly so proud of herself for pulling off the trick.

“What?!” Alexis could be heard saying in the background.

“I’m already outnumbered and now this,” he began the caption to the video. [Serena Williams’] mini-me [Olympia Ohanian] is learning quick.”

Olympia, born Alexis Olympia Ohanian Jr., couldn’t have been cuter in the clip, and her parents have been absolutely doting on her as they hit up the best sights of Australia! Along with sharing the adorable video above, Alexis and Serena also took Olympia to see some of Melbourne’s greatest destinations, with a visit to an amusement park and more.

Of course, this isn’t a family vacation for the Williams-Ohanian clan; it’s more of a work trip for Serena!

“How Tennis Thought Me A Lesson”- Maria Sharapova