When WWE announced that Rey Mysterio and Seth Rollins would battle it out in an ‘eye for an eye match,’ fans really didn’t know what to expect.

Well, seeing the legend holding his eye on live TV after having it popped out is certainly one to check off the list.

Mysterio has been hungry to get some revenge on Rollins after the Monday Night Messiah forced his eye onto some steel steps a few months back causing the former WWE champion to lose his vision in one eye.

Of course, Mysterio wanted Rollins to feel that pain and that led to the match at The Horror Show at Extreme Rules.

The pair of them put on a truly fantastic wrestling match. It made you wonder what they could do on a grand stage with nothing like extracting an eye weighing them down. 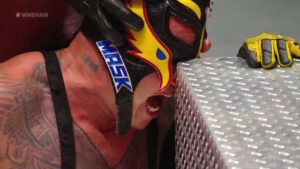 However, following a sensational match where Rollins tried various, sadistic ways to get Mysterio’s eye out, he went back to the tried and trusted steel steps to carry out his dastardly act and, importantly somehow, win. 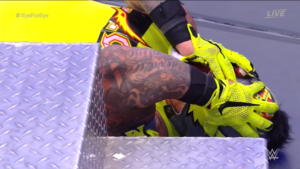 WWE really had Rey Mysterio lose by… losing an eye 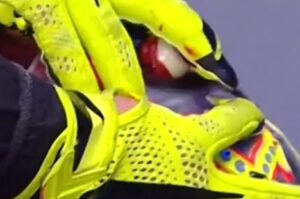 WWE clearly used a fake eye for the extraction

As you can see from the footage and pictures, Mysterio’s holding a fake eye that he either had on his person or the ref handed to him when Rollins started to be sick.

He simply held that and the camera caught enough of it to show that the match was done, but the lack of blood has certainly confused a good portion of fans.

It was that simple. No CGI effects like had been mooted. Instead, it was a good old fashioned fake eye from a billion-dollar company.

Where does WWE go with Rey Mysterio now? This year, the poor legend has been thrown from the top of a building (Money in the Bank) and now has had his eye out – and we’re still only in July.

It has been reported that he isn’t technically under contract with WWE right now and he is working on a per appearance basis, but the expectation is that he will re-sign when things get back to a semblance of normality.

During the pay-per-view, they did say Mysterio was on his way to the doctor’s and he had a good chance of getting his eye repaired, so we’ll see where the story goes.

American music superstar, Beyonce, has lent her support to the ongoing End SARS protests in Nigeria.

The singer took to her verified Instagram account to announce to her 155 million followers that she “has been working on partnerships with youth organisations”.

The mother of three further stressed that there has to be an end to the Special Anti-Robbery Squad.

Beyonce wrote, “I am heartbroken to see the senseless brutality taking place in Nigeria. There has to be an end to SARS. We have been working on partnerships with youth organisations to support those protesting for change.

“We are collaborating with coalitions to provide emergency healthcare, food, and shelter. To our Nigerian sisters and brothers, we stand with you. Please visit Beyonce.com for a list of organizations to show your support.”