Zoe Saldana showed off her modeling skills for her latest magazine cover.

The 42-year-old Avatar star looked effortlessly chic in eye-catching ensembles from Prada, Chanel, Louis Vuitton and other fashion houses as she posed for flaunt.

The actress also talked about the unexpectedly positive changes 2020 brought for her and her family.

Zoe opened up in the profile about her family with her husband, Italian artist Marco Perego, and their three children: twins Bowie and Cy, six, and her younger son Zen, four.

According to her, prior to the pandemic they barely had time for each other. ‘Until now, we were the “20 minute family” — always running off to school, to karate practice, or to work,’ she explained.

‘Then suddenly the waters calmed, the music stopped, and the phones stopped ringing. It was very raw and very beautiful.’ 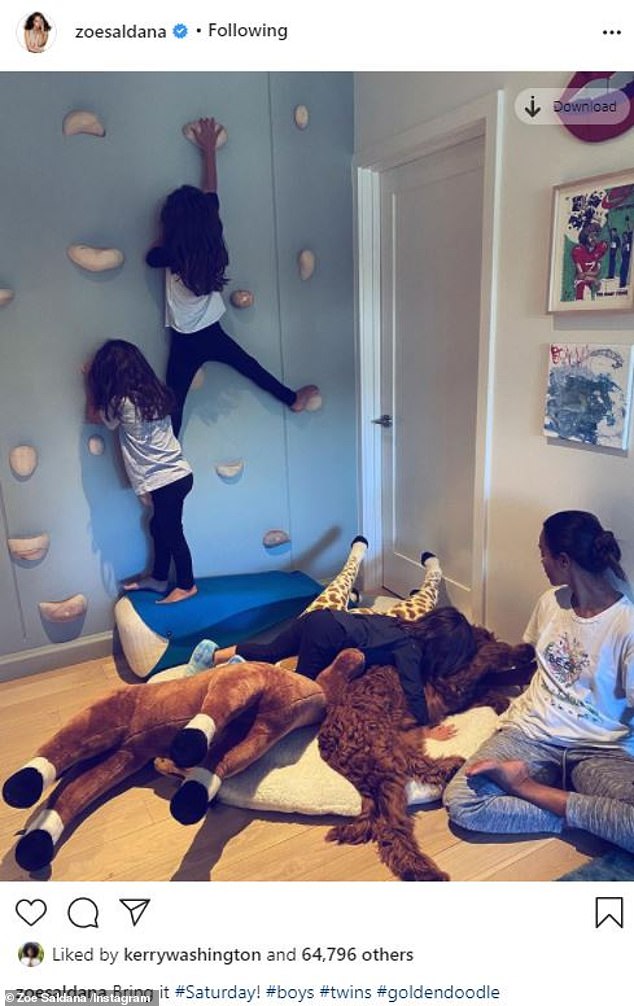 Although she is often away on big film sets, Zoe added that she relishes being home with her husband and children in a more old-fashioned maternal role.

‘I want to be home, because that role is becoming more real to me. I’m becoming more passionate about it than any other role I can play.’

Zoe also examined her status as one of the most commercially successful actors in history, with author Monica Montero Lim noting that she plays major roles in three of only five films to gross more than $2 billion: Avatar (2009), Avengers: Infinity War (2018) and Avengers: Endgame (2019).

Avatar 2 was originally planned for a 2021 release, though it has been pushed back to 2022 due to the ongoing coronavirus pandemic.

The actress, who acts on a set covered in motion-capture dots in order to be transformed via computers into the blue-skinned alien Neytiri, relished the chance to play a character outside of terrestrial ideas about race.

‘The focus is not on the color of my skin, my gender, or my cultural background. They allow me to imagine and reinvent myself and be the chameleon actors are supposed to be,’ she said, adding that it was a ‘gift’ to play the character in four sequels.

Zoe added elsewhere that she had a negative reaction to classic heroines like the lead characters of Jane Austen novels and instead gravitated to female film action stars.

‘I was always jumping around. I wanted to climb, wrestle, and fight! I dreamt of saving the day,’ she explained. ‘I fell in love with [The Terminator’s] Sarah Connor and [Alien’s] Ellen Ripley, and the films Whoopi Goldberg would do like Jumpin Jack Flash! These were my women!’

The actress graced the cover in an edgy black Prada top with cut-out ovals and a matching skirt, along with a thick snapping belt to highlight her hourglass figure.

Zoe added some sparkle to her outfit with multiple Roberto Coin rings and bracelets.

She looked confident and collected in a royal blue textured Chanel jacket and high-waisted pants that she wore with a white top with a ruffled collar and sleeves.

Her lustrous raven tresses were styled in an intriguing braid twisted into a delicate loop.

The 5ft7in Star Trek star was all legs in another photo of her lying on a table in a gleaming Louis Vuitton mini dress covered in enormous cymbal-like sequins.

Related Topics:zoe saldana
Up Next